SIZE: Length (including tail) 1,6 m, mass 52 kg. COLOUR: Pinkish or yellowish grey skin sparsely covered in coarse hairs which are a reddish brown in colour. The skin is often stained darker by earth. MOST LIKE: Unlike any other animal. HABITAT: Wherever termites and ants are available as food, and where the earth is soft enough for burrowing. They avoid stony or rocky terrain and high forest, but occur in open woodland and grassland areas. 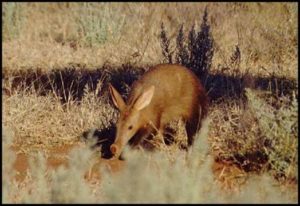 The Aardvark diet consists of ants and termites, for which the aardvark is totally adapted. Their claws burrow into the ant hill and their ears are folded back to avoid dirt; the muzzle is inserted into the ant hill with the hairs at the end of the muzzle acting as a dust filter, then the tongue is projected into the passages of the ants’ home. When foraging, aardvarks move slowly with their noses close to the ground, as their sense of smell is highly developed.

They tend to move around irregularly searching for ants. The only other food eaten by the aardvark is wild melons. The aardvark is very strong and can burrow a shelter in just minutes. A single young is born inside the burrow. Many other animals use the burrows of aardvarks once they have stopped using a particular burrow.

DISTRIBUTION
The Aardvark is strictly nocturnal and is seldom seen. These animals are piglike and have a touch of bear in their appearance: hence the various informal names: ‘earth-pig’ and ‘ant-bear’, but they are actually biologically unique. They have a fleshy, elongated muzzle, long, rabbit-like ears, a thick tail, a sticky ribbon of a tongue between 20 and 30 cm long, a sparsely haired torso and sharp claws on their webbed feet.