SIZE: Shoulder height 40 cm, mass 11 kg. COLOUR: A grey coat, marked with black spots and bars. It has a grey forehead and a conspicuous broad black band across the face and around the eyes. The throat, chest and lower limbs are black. MOST LIKE: Large- and Small-Spotted Genets, but the civet is much larger. Tail is shorter and not as clearly banded as the genet's. Genet's black facial mask less well developed and not through eyes. HABITAT: Well watered savanna and woodland and also high grass and reed beds. 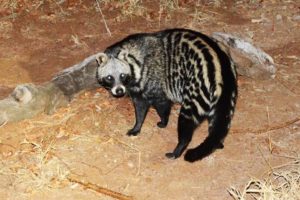 The Civet is a very timid creature which is closely related to mongooses and genets. It is almost doglike, as it has a long body and bushy tail. When it is threatened its mane rises; the civet then turns sideways and exposes the crest to its fullest extent.

Civets are solitary, nocturnal animals which are primarily active for a few hours after sunset. They can sometimes be spotted in a family group of an adult and two or three youngsters.

The civet’s diet consists of grasshoppers, beetles, wild fruit, rats, snakes, millipedes and carrion. They capture their larger prey with a series of bites, shakes and throws and sometimes have to leap aside to avoid being bitten in return.