SIZE: Shoulder height (m) 95 cm, (f) 90 cm, mass (m) 70 kg, (f) 61 kg. Both sexes have horns. COLOUR: Dull reddish-brown, with white blaze on the face, usually broken by a narrow brown band just below the eyes. Underside is off-white, and light brownish colour on legs continues to hooves. Tail white on underside with long brown tuft. Horns are straw-coloured. RECORD LENGTH OF HORNS: 51 cm MOST LIKE: The Bontebok, but is slightly larger and not as richly coloured; blesbok also lack the bontebok's purple sheen and contrasting white markings on buttocks and lower legs. HABITAT: Open grassland close to shade and water. 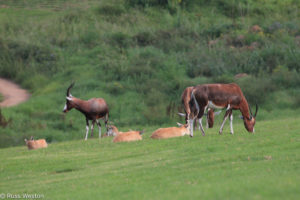 Blesbok are territorial, with a social structure consisting of bachelor herds, and breeding herds consisting of a dominant male with his females. This tireless, nimble-footed athlete of the grasslands is particularly possesive towards his harem, and performs an impressive ritual of threatening behaviour to warn off rival males. The blesbok resolutely eyes its opponent by standing very still, with its head held high; it then issues a volley of snorts, lowers its head, and leaps into the air clashing horns with its rival. The blesbok male marks its territory by making dung heaps and also by rubbing scented glands on its face against blades of grass. Expectant mothers stay with the herd to give birth to single calves in early summer. Calves are able to stand, and to run with their mothers, within 30 minutes of birth: they tend to form either nursery groups within the herd, or join bachelor herds, from about 10 months old. Male calves remain in their mother’s herd until calving time; while females sometimes remain with their mothers for up to two years.

The Blesbok gets its name from the Afrikaans for blaze (‘bles’): a reference to the prominant white blaze on the forehead, which is divided into two by a brown band just above the eyes. The legs, belly and rump are lighter in colour than the rest of the body. The blesbok is very similar to the bontebok (see below for differences), with similar habits: the two are actually sub-species, but are sufficiently well-recognized in the field to warrant seperate attention. They are gregarious, diurnal grazers, favouring grassland close to water, and they move between feeding and resting sites in single file along well-worn paths. During the hottest time of the year they may move deep into shady bushes, resting in small groups.