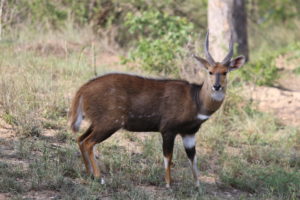 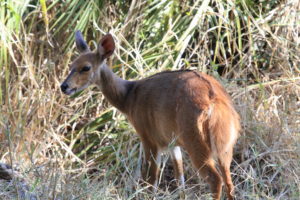 They are browsers, and are selective feeders, but are able to modify their feeding habits, and will eat grass on rare occasions. Although they are not large, the fighting ability of a bushbuck should not be underestimated. Normally nervous and shy, a cornered male will turn into a brave and fearsome aggressor, charging its pursuer with its sharp, sturdy horns and a savage will. Leopards, wild dogs and humans have been killed by the repeated thrusting of the slightly spiralled horns, which are up to 52 cm long. They have also been known to fight to the death in rivalry for females. Bushbuck are not only excellent jumpers, but prodigious swimmers: in times of flood they have been known to take to the water and swim for up to three kilometres without apparently tiring. They have a very characteristic hoarse, baboonlike bark. As long as there is a reliable supply of water nearby, bushbuck will live in the same area for years, wandering further from home only in the wet season. A single lamb is born in spring or summer.

DISTRIBUTION
Bushbuck are medium-sized antelope, which are solitary and nocturnal, and therefore rarely seen. Occasionally they do form small groups of two or three individuals. Adult males are dark brown in colour, with a crest of yellowish-white hair extending from the shoulders to the base of the tail, a white patch on the throat and a band of white towards the base of the neck. They are closely associated with water, and inhabit dense riverine bush or forest.