SIZE: Shoulder height 54 cm, mass 10 kg. COLOUR: Deep reddish-brown, speckled with white hairs to give a greyish tinge. Underparts are lighter and a whitish ring circles the eyes. RECORD LENGTH OF HORNS: 12 cm MOST LIKE: Sharpe's Grysbok and Steenbok. It is different from Sharpe's grysbok in that it has a pair of supplimentary hooves above the fetlock. Grysbok differ from steenbok in having shorter ears and horns, and uniform buffy underparts unlike the pure white underparts of the steenbok. HABITAT: Thick coastal forests. 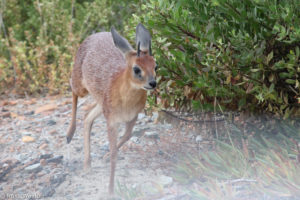 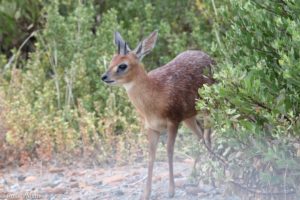 They are found as far west as the Cedarberg Mountains and as far east as the Eastern Cape. They are relatively more active at night than during the day, and are predominantly browsers.

Grysbok lack the grace and proud posture of the steenbok: the grysbok has a thickset body, and fragile, short legs. The forelegs are a little shorter than the hind legs, causing its back to slope. The grysbok spends a lot of time washing and grooming its thick, wiry coat. If it feels threatened, it may lie flat on the ground and then speed away, keeping its head low.

Grysbok have small territories and can usually be seen on their own, in pairs during the mating season, or in small family groups. A single lamb is born, usually in spring. The lamb is born with a darker coat than its parents and is kept hidden for the first few months until it can fend for itself.

DISTRIBUTION
The Cape Grysbok is a secretive and solitary animal, which is partial to the shoots and leaves of vines, and steals out under cover of darkness to feast on this rich food.