SIZE: Shoulder height (m) 1,27 m, (f) 1,24 m, mass (m) 255 kg, (f) 245 kg. COLOUR: Whitish or cream-coloured coat overlaid by black stripes. White underbody has dark central stripe extending from chest to belly. SPEED: 65 km/hr GESTATION PERIOD: 12 months POTENTIAL LONGEVITY: 35 years MOST LIKE: Hartmann's Mountain Zebra, but slightly smaller in size and weight. Also similar to Burchell's Zebra, but lacks Burchell's yellow or grey shadow stripes between the black on the hindquarters: also the stripes do not go right around the belly. The stripes on the legs extend clearly down to the hooves and encircle the legs. HABITAT: Mountainous areas close to water and suitable grazing. Shelters in ravines or overhangs. 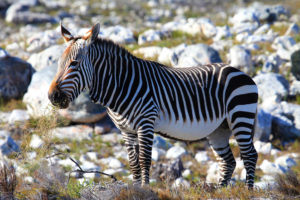 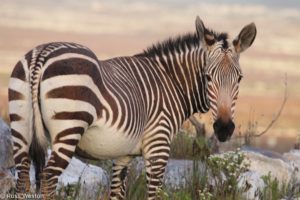 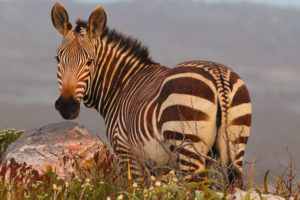 Young males form bachelor herds from the age of two years and leave the herd, returning when they are old enough to handle a herd of their own. The quest for leadership is often a fierce one in which either the challenger or challenged is severly injured. Cape mountain zebras are found in herds of up to 12 animals, but usually around five or six, consisting of a dominant stallion with mares and foals. Single foals, born mostly in December, nibble at pellets of their mothers’ faeces. These contain intestinal micro-organisms which help them digest the grasses that form their staple diet.

They differ from Burchell’s (plains) zebra in that the black stripes on their bodies are narrower, and they do not have ‘shadow stripes’; also their stripes do not reach under their bellies: they have white underparts. On cold winter mornings they will move, one by one, to the east-facing slopes of their territory and stand at right angles, soaking in the warming rays of the sun.

DISTRIBUTION
The Cape Mountain Zebra is one of the world’s rarest large mammals – their numbers dwindled to fewer than 100 individuals in 1950 – but they have come back from the brink of extinction to flourish in selected South African reserves. The stripes of all zebras, like fingerprints, are never the same on any two individuals: also, the two sides of their bodies do not match perfectly.