SIZE: Shoulder height 60 cm, mass (m) 14 kg, (f) 14,2 kg. COLOUR: Golden fawn to yellow-orange with white chin, throat, chest, abdomen and rump. The upper chest is golden fawn. Upper surface of bushy tail is black or dark brown, and the under surface is white. White blazes around the eyes. GESTATION PERIOD: approx. 7 months POTENTIAL LONGEVITY: 13.5 years RECORD LENGTH OF HORNS: 19 cm MOST LIKE: The Steenbok, but the oribi is larger with a longer and more slender neck. The oribi has a black tail, while the steenbok's tail is reddish-fawn. HABITAT: Open grassland, grassed vleis, and flood plains. The grass must be short, and water must be in the vicinity. 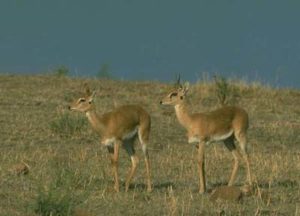 The oribi emits a shrill whistle when alarmed, and then gallops away, bounding stiff-legged into the air every few strides, in order to glance in all directions above the vegetation. Oribi roam on their own, in pairs or in small groups.

Males mark their territory by a secretion from the glands in front of their eyes. Oribi rest during the heat of the day, and are most active in the morning, late afternoon and evening.

They are grazers, and are often seen in areas after veld fires, as they eat the fresh green grass shoots that spring up. The oribi has become a fairly rare species in the southern African region, due to changing land use patterns, as well as its many predators. A single lamb is born, usually in summer, and the female oribi hides it in thick grass, where it will lie motionless if it is approached.

DISTRIBUTION
The Oribi is a small antelope, charactistically marked with two white blazes, one on either side of the nostrils, as well as distinct white crescent-shaped bands above the eyes.