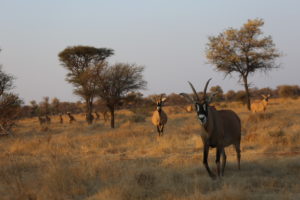 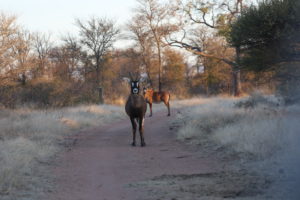 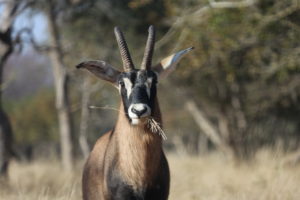 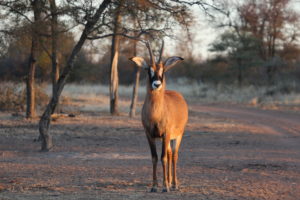 Roan Antelope are fairly gregarious, normally being found in herds of 6 – 12 animals; sometimes herds are larger (up to 25 individuals), with temporary aggregations of up to 80 on record. While Roan Antelope are not actually territorial, they have many attributes of a territorial species: the Roan Antelope bull is fiercely protective towards his harem and will ward off the attentions of a strange bull by clashing horns. During this display, the contestants sometimes fall on to their knees. Despite lengthy and noisy engagements, serious injuries are rare; as with the sable, the Roan Antelope’s ritualised fighting has evolved to minimise injuries to key members of the population. The difference between the Roan Antelope and many other species is that the dominant male is defending his females from the attention of other males, and not a particular piece of turf. There is a definite hierarchy amongst the females and juveniles: the dominant female usually takes the lead in herd movements, with the dominant bull following her. There are also bachelor groups and solitary males, which are normally biding their time until they are strong enough to challange for a herd of their own.

Second in size only to the eland, the Roan Antelope, with its horse-like face and donkey-like ears with prominent tassles of dark brown hair at the tips, has been known to cause an identity crisis amongst its offspring. More than once, a young calf has broken from cover and dashed after a passing horse, believing it to be its mother. The Roan Antelope gets its name from its colour, as it can have a strawberry tinge in certain light. They graze in the early morning and late afternoon, and rest during the heat of the day. They will also browse, although only to a small extent. When threatened by a predator, the Roan Antelope may raise its beautifully proportioned body, and, hissing and squealing with rage, will bare its teeth and chop at its attacker with flailing hooves and sweeping lunges of its scimitarlike horns.

A single calf is born, at any time of year. The calf lies concealed some distance from the herd, where it will be visited by its mother: usually the presence of its mother is enough to bring the calf out, but if not she will call to it. Although it is not known whether the calves are odourless, the young usually choose a new hiding place after the mother leaves, thereby lessening the chance of being scent-trailed by predators, in a similar manner to the sable calves. Once the calves are slightly older, they aggregate into nursery herds, which may reach 20 in number. The nursery herds occupy fixed areas which are largely exclusive to adjoining herds, and each nursery has a dominant bull.