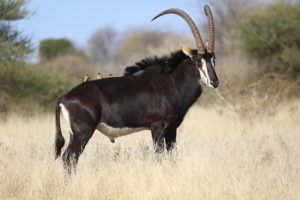 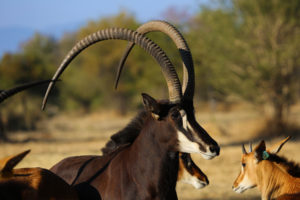 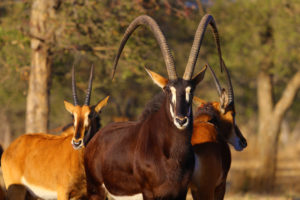 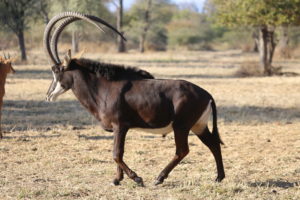 They are gregarious, often forming herds of 20 – 30, although they do form temporary groupings of up to 200. Adult bulls establish their own territory, and during the mating season aggressively defend it, with sometimes fatal results. Young males know better than to tangle with their elders, and split up into separate bachelor herds until they are old, wise and strong enough to make a successful challenge against a territorial bull. A breeding herd is led by the territorial bull, but a dominant cow will take the initiative in finding new pastures and water. Single calves are usually born between January and March when the grass is fairly high. The cow leaves the herd for the birth. Calves are reddish-brown in colour, and lie concealed in a shady spot for most of the day, only visited once or twice a day by its mother so that it can suckle. The calves don’t seem to have an odour, which helps protect them against predators: after being suckled and cleaned by its mother, they usually choose a new hiding place, thereby lessening the chance of being scent-trailed by predators.

Strikingly coloured and with powerful horns, the Sable Antelope is undoubtedly lord of the antelope. Aloof from other species, fearful even to some predators, it is truly a king amongst commoners. Other antelope back off meekly when the Sable Antelope approaches, and spotted hyaenas, wild dogs, cheetahs and leopards are very reluctant to challenge this courageous and dangerous fighter.

Even lions have been known to come off second best; gored to death by those deadly horns. Sable Antelope are a savanna woodland species, and are dependant on cover and the availability of water. They are mainly grazers, but will browse to a small extent, particularly towards the end of the dry season when the nutritional value of grasses is low.