The Garden Route runs along the Western Cape coast from George to Port Elizabeth, and is so called because of its perpetual lushness. Its appeal is further enhanced by the ridge of folded mountains running along the coast, whose form and flow often resembles ocean waves. The diversity of scenery from exquisite empty beaches to staggering mountain passes, together with an unlimited choice of hotels, guest houses, lodges and country houses, makes this one of the most visited areas in South Africa.

WILDERNESS NATIONAL PARK
Travelling along the coast road, the lushness seems to increase with every mile and the area known as Wilderness, could be mistaken for Switzerland. It is a charming world of lakes, rivers, fens and estuaries surrounded by pine forested slopes dotted with wooden chalets. The only difference is that in Switzerland you won’t find the warm and inviting Indian Ocean just across the road.

Nature trails wind through densely wooded forests and along riverbanks and you can canoe through serpentine channels connecting one lake to another. There are even overnight canoe and walking trails in this park.

KNYSNA NATIONAL LAKE AREA
The well-visited town of Knysna, in the heart of the Garden Route, rests by a warm lagoon which ebbs and flows with the tides. The lagoon is dominated by the craggy bastions of the twin Knysna Heads and the Indian Ocean gushes through the narrow entrance formed by these rocks. Viewpoints from the top of the eastern Head give you the dual vistas, over the entire lagoon or out to sea. You may also be lucky enough to see a yacht surf through the narrow channel to the safety of its lagoon mooring. On the western head is a nature trail in the privately owned Featherbed Nature Reserve, accessible only by ferry.

The Knysna National lake Area is not a national park, but is monitored by the Parks Board to make sure that ongoing development is environmentally friendly. The lagoon has borne witness to centuries of trade in timber, ivory and gold, but nowadays the shores are lined with residential areas, a busy waterfront of shops and restaurants, a yacht basin, boat yards and the famous Knysna oyster hatchery.
Boat trips of all sorts can be undertaken and boats can also be hired, but as much of the lagoon is very shallow, it is essential to keep to the buoys marking the deep channel. No inexperienced skipper should attempt to exit the lagoon by way of the Heads, as this is a difficult and dangerous passage strewn with rocks and strong currents.

What makes Knysna such an attractive place is its range of scenery, which includes inland forests and mountains. Little of the massive indigenous forests still exist, and much has been put down to pine forestry, but there are still some areas of tall evergreen Outeniqua yellowwoods and stinkwoods, and deciduous ironwoods, towering over forest tree ferns.

ANIMALS & BIRDS
The exceptionally beautiful Knysna National Lake Area is home to the endangered Knysna seahorse, which clings on to plants with its tail and changes colour to match its surroundings. The sandbanks and salt marshes of the lagoon and river mouth, teem with life and in turn provide food for an immeasurable number of organisms. Whales and dolphins are regular visitors along the entire Garden Route coastline.

Elephant were all but hunted to extinction in the Knysna area and only one remains. She is a grumpy old matriarch who turned down the friendship of some playmates brought in to keep her company.

She now roams the forests alone while the other elephants have been re-located to a wildlife reserve. There are a growing number of private reserves along the Garden Route who have stocked up with game such as elephants, zebra, wildebeest, giraffe, buffalo – all of which were indigenous to the area once upon a time.

Many of the woodland birds are surprisingly colourful birds including redbilled woodhoopoe, Knysna woodpecker, paradise flycatcher, Knysna lourie and lesser doublecollared sunbird. While at the lakes, wetlands and lagoon you may see fish eagles, cormorants, kingfishers, blacksmith plovers and Egyptian geese.

SEASONS
The Garden Route’s temperate weather falls between two climatic regions of summer and winter rainfall, consequently it rains whenever it feels like it, (mostly at night), which keeps the area perennially green.
Spring: You can feel spring in the air by the end of August and into September. October can be quite mixed because just when you think summer has arrived, another cold front moves in.
Summer: The months of November to March are hotter, with December to February seeing mid-summer daily temperatures around 75°-86°F (24-30°C).
Autumn: Temperatures start cooling down from about April but it can still be very pleasant until June.
Winter: June, July and August are mid-winter months but the days may still be bright and warm, but it gets cold in the evening and cold fronts pull in.

END_OF_DOCUMENT_TOKEN_TO_BE_REPLACED 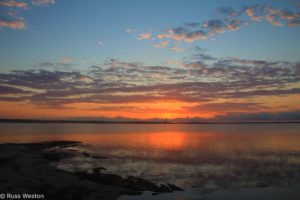 The Garden Route runs along the Western Cape coast from George to Port Elizabeth, and is so…