The drama and magnificence of the Drakensberg Mountains create such visions of natural grandeur that they take your breath away. Mountain passes open up into immense valleys into which you descend on a curvaceous road. Endless folded hills stretch in a swathe of green velvet, while in other places the sandstone rocks glow gold in evening light. In contrast, sharp mountain peaks pierce the dense blue sky - sometimes with a cap of snow.

There are several parks and reserves in and around the Drakensberg Mountains, some private and others administered by KZN Wildlife and National Park’s offices.

The main one is the Ukhahlamba Drakensberg Park, which runs for hundreds of miles down the eastern border of Lesotho (a small mountainous Kingdom in the heart of South Africa). The appealing names given to spectacular mountains and rock formations are very enticing; Cathedral Peak, Champagne Castle, Giant’s Castle and Drakensberg Garden.

These secretive rocks and caves were once the home of the San Bushmen – original inhabitants of Southern Africa. Their simple hunter-gatherer lifestyle was at odds with the colonisers and dominant African tribes, and the bushman race was all but wiped out. However, they left their mark with art forms painted on rock, from which we now try to decipher meanings.

The Drakensberg Mountains are visited by nature loves, bird watchers, families and in particular hikers and climbers. There is something for just about everyone who wants to soak up the magnitude of the surroundings and the crystal quality of the air which is cleansed by summer storms. Thunder and lightening echo through the infinite expanse of the Drakensberg in a theatrical spectacle and only during this furore, can you imagine the savage battles that were once fought here during confrontations between Brits, Boers and Zulus.

ANIMALS & BIRDS
These mountains are the domain of eagles who lord over the skies in particular black eagles and bearded vultures. Roaming the hills and valleys are herds of eland and smaller buck.

SEASONS
Rainy Season: It rains in summer in sudden bursts and thunderstorms from October to April. Everything is green and lush and flowers cover the meadows.
Dry Season: The dry season lasts over the winter months from May to September and in mid-winter (June to August) it gets extremely cold at night with sharp frosts and snow falls.

END_OF_DOCUMENT_TOKEN_TO_BE_REPLACED 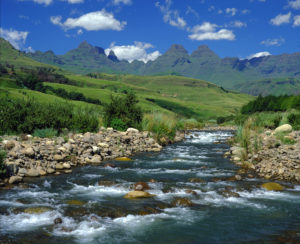