There is something very compelling about the Kalahari and it is probably nothing like you imagine. It is not a flat sand desert, nor is it rippling with endless pale dunes. On the contrary, it is undulating with rich red sand dunes and well vegetated with shrubs, patches of trees and even some grasslands.

It seems like a pretty inhospitable place for man to live, yet the San Bushmen have inhabited the Kalahari for at least 10,000 years. Their legacy of rock art and engravings tells us about their past lives, but very few San are left to continue that nomadic hunter gatherer lifestyle.

KGALAGADI TRANSFRONTIER PARK
Since 1948 South Africa and Botswana have co-operated in the management of two adjacent Kalahari parks. In 1999 the first cross-border collaboration of its kind united the two parks into one under the name, Kgalagadi Transfrontier Park. This has unified the southern Kalahari into one huge conservation area, twice the size of Kruger National Park, and will hopefully serve as a model for future transfrontier conservation projects.

This vast wilderness of the Kalahari fulfils the need for space and solitude and encourages a certain slowness into a hectic safari.

ANIMALS & BIRDS
The park was previously called Kalahari Gemsbok National Park, as the animal most at home in this arid region is the gemsbok (also called oryx). This large horse-like antelope is supremely adapted to the desert environment and can go for months without water as it reabsorbs its own waste fluids and barely sweats. Its core temperature can rise far beyond that which would kill most animals, and to avoid literally boiling its brains, blood is first passed through the nostrils to cool it down.

Another animal that epitomises the Kalahari is the meerkat (also called suricate). These cute mongooses scamper around in gregarious packs, foraging for scorpions, beetles, lizards and mice and scatter at the first sign of danger from an eagle or other predator.

Large-scale migration can occur in such a huge park and gemsbok, springbok, blue wildebeest, eland and red hartebeest follow their instincts in order to find better pastures. Such a good supply of food attracts carnivores like lion, leopard and cheetah. Other distinctive creatures of the Kalahari are small monogamous bat-eared foxes, sociable weavers who live in the feathered equivalent of an apartment block of nests, and the King of the Kalahari – the black-maned lion.
Sociable Weaver Bird nest

AUGRABIES FALLS NATIONAL PARK
The Kalahari sands of the Northern Cape are transformed by the mighty Orange River, which brings life to South Africa’s hottest driest area. Along its banks vineyards thrive and soft fruits like peaches and apricots grow willingly.

The river widens to over 1 mile (2km) across and flows gently until it suddenly meets the narrow cataracts at the Augrabies Falls. The whole river is forced under great pressure through narrow rocks just a few feet across, before plunging 211 feet (65m) into a deep pool. It is thought that there is a fortune in diamonds, washed down by the river into this pool, but its depths are impenetrable so the curiosity continues. The incredible power of this water has cut a deep and impressive ravine through sheer granite rock for several miles below the falls.

The National Park is well organised and well visited, with several driving and walking trails offering viewpoints over various sections of the river.

SEASONS
Summer: Spring and early summer from September to December is dry and warm, but by January it is very hot (up to 102°F (39°C), and the rain arrives. If you brave the very hot late summer months of January to March, you might be entertained by formidable light and sound extravaganzas from thunder and lightening storms.
Winter: The cooler winter months of April to September are probably the best times to visit the Kalahari as the days are clear and warm, but nights can get very cold.

FACTS
This is not a malarial area

END_OF_DOCUMENT_TOKEN_TO_BE_REPLACED 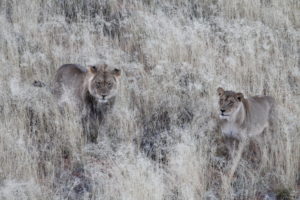