Mosi-ao-Tunya National Park is divided into two sections; a game park along the riverbank and the staggering Victoria Falls, each with separate entrances.

The immense and awe-inspiring Victoria Falls are known to the local people as ‘Mosi-oa-Tunya’ – Smoke Which Thunders’, and is the greatest known curtain of falling water. However you describe them, the falls are a breathtaking spectacle which, “roar as if possessed”, and spew vast clouds of mist from a dark and seething cauldon.” They are one of the greatest natural wonders in the world.

David Livingstone ‘discovered’ the falls in 1885 and named them after his Queen. The scene he encountered was a mile-wide (1.6km)

sheer basalt fault line over which the mighty Zambezi tumbled to a depth of 300 feet (100metres), creating a cloud of spray which can be seen up to 20 miles away.

The Victoria Falls Bridge was commissioned by Cecil John Rhodes in 1900, and was completed by 1905, although Rhodes never lived to see it. It spans the impressive gorge and forms a sort of no-mans land between the border posts of Zambia and Zimbabwe, and provides easy access between the two countries. The famous adrenaline pumping Victoria Falls bungy jump is done from this bridge, with a terrifying drop of 360ft (111m). The bridge has an amazing view of the Falls and the lush green mist-soaked rain forest thatexists on its edge, although nothing can beat a ‘flight of angels’, to fully appreciate the size and grandeur of the falls. There are many vantage points on numerous paths, each giving a different view and some giving a good dousing from the spray. The Knife Edge Bridge is particularly staggering as you stare into the eastern cataract and the main falls towards the ‘Boiling Pot’. A resident troop of very cheeky baboons often clamber around on this bridge and patrol it like a toll gate.

As the Zambezi enters the steep sided Batoka Gorge, numerous frothing rapids churn into a frenzy. It is on these rapids that people unleash themselves in rubber rafts or even on boogie boards, for a white-water thrill of a lifetime. Just about any adrenaline sport can be attempted around here, either on the Zimbabwean or Zambian side. Many people say they prefer the Zambian side of the Victoria Falls, as it is less commercial than the Zimbabwe tourist hub.

WILDLIFE RESERVE
This is a small wildlife sanctuary (only 25.5 square miles (66 square kilometres) running along the north bank of the Zambezi, encompassed in Mosi-oa-Tunya National Park. It is worth a short visit not only for the sight of what are probably Zambia’s only remaining rhino, but also for some common species.

Within this park is the Old Drift cemetery where the first European settlers were buried. They made camp by the river, but kept succumbing to a strange and fatal illness. They blamed the yellow/green-barked ‘Fever Trees’ for this incurable malady, while all the time it was the malarial mosquito causing their demise. Before long the community moved to higher ground and the town of Livingstone emerged.

Livingstone’s main street is dotted with classic colonial buildings, and while some are decaying, many others have been restored. Victorian tin roofed houses with wooden verandas are a typical example of the English settler architecture and there is also a distinct art-deco influence. Livingstone is a quiet lazy little town with much charm and a feeling of optimism in the air.

ANIMALS AND BIRDS
Baboons are frequently seen on the paths leading to the falls and small antelopes and warthogs inhabit the rainforests that hug the edge of the falls. In the wildlife reserve, the pastures and tall riverine forests contain plenty of birds and a scattering of animals including some white rhino, elephants, giraffe, zebra, sable, eland, buffalo and impala.

SEASONS
Rain Season: Peak flood season is in March and April and the falls are at full power. This also means that the full width of the gorge is hard to see and photography is difficult due to immense amounts of spray. The aerial view at this time is spectacular.
Dry Season: The falls are at their lowest around November and December. This season’s gift is the opportunity to appreciate a clear view of the sheer cliffs and the abyss into which the water falls.

END_OF_DOCUMENT_TOKEN_TO_BE_REPLACED 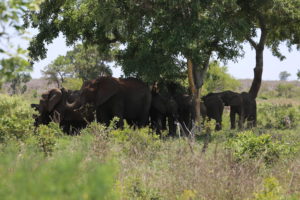 Mosi-ao-Tunya National Park is divided into two sections; a game park along the riverbank…