The Luangwa Valley covers almost the entire eastern region of Zambia and contains some sensational national parks. North Luangwa National Park is one of the most spectacular surviving wilderness areas in Africa and has been called "one of the greatest wildlife sanctuaries in the world today." It is so remote that self-drive safaris are not allowed and you may only enter if accompanied by a licensed guide. There is really only one main road leading there, but fly-in safaris make it accessible.

The main difference between the North and South Luangwa parks lies in their history. For years the north was the poor relation to the South Luangwa National Park which was Zambia’s premier park with good funding.

In 1986, this all changed when renowned researchers and authors Mark and Delia Owens (who wrote Eye of the Elephant & Cry of the Kalahari), based themselves here to carry out more research. Their presence had a profound impact and their conservation efforts resulted in a great reduction in poachers. North Luangwa National Park now has some of the most zealous game rangers in the country. If you are the kind of traveller who likes adventure, then this park will supply you with Africa at its absolute wildest.

The diversity of habitats in North Luangwa leaves you feeling bewildered. There are areas of pure mopane woodlands and lush riverine forests of red mahogany, ivory palms and sausage trees laden with long dangling fruit.

The Luangwa River acts as the eastern border to the park, while the western boundary is marked by the impressive Muchinga escarpment rising to 3,575 feet (1,100metres) above sea level. The Mwaleshi River originates high in the hills of this escarpment and cascades down in a series of rapids and waterfalls before reaching the valley floor by means of the beautiful Chomba Waterfall. This river in the heart of North Luangwa Park, recedes in the dry season leaving many pools, which attract large herds of antelope.

ANIMALS AND BIRDS
This is primarily a woodland park noted for huge herds of buffalo – sometimes more than a thousand head. Other common mammals include lion, leopard and hyena, elephant and numerous antelopes including, bushbuck, puku, kudu, impala and some not found in the south such as oribi, hartebeest, reedbuck and the largest of all antelopes, eland. The park also contains zebra, wildebeest warthog, baboon and vervet monkeys.

There is an awesome variety of birds with half-collared kingfishers, long-tailed wagtails, babbling starlings, Pel’s fishing owl and purple crested turaco, to name just a few of the special ones.

SEASONS
Rainy Season: November to March is the wet season with most rain falling during December to February and humidity reaching a peak in January, February and March. The park is inaccessible during heavy rains.
Dry Season: It barely rains from April to October and the coolest months are May, June and July. As the months progress it gets hotter and peaks in October at around 86°F (30°C).
Best time to visit North Luangwa is July to October

• Close encounters with big animals from a canoe or boat
• Adventure in one of the wildest places on earth
• Buffalo herds 2,000 strong
• Walking amongst game
• Incredible diversity of habitats
• Animals unused to humans
• Few other visitors

FACTS
Avoid the rainy season
This is a malarial area

END_OF_DOCUMENT_TOKEN_TO_BE_REPLACED 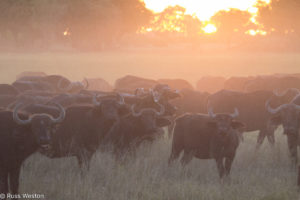