SIZE: Length (including tail) 55 cm, mass 1,4 kg. COLOUR: Varies from grey to brownish-grey, with 10-12 distinctive dark brown or black bands from shoulder to root of tail. Bands are most noticeable on lower back and fade away on lower flanks. Tip of tail is dark brown and so are the legs. POTENTIAL LONGEVITY: 12 - 13 years MOST LIKE: The Suricate, but banding across back more distinct, and the suricate is smaller. Its tail is bushy, while the suricate's is short haired. HABITAT: Savanna, usually close to water and with sufficient undergrowth, fallen logs and other vegetal debris to provide cover. 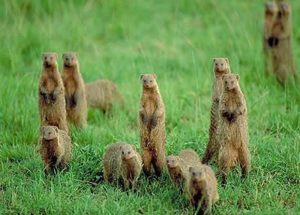 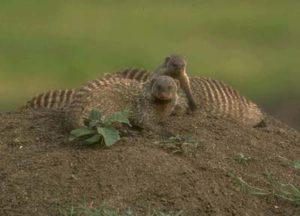 They prey on insects, lizards, birds and small mammals, and are often found hunting for insects in the company of baboon. They love birds’ eggs and crack them by pitching them backwards through their hind legs against a rock or stone (the Dwarf Mongoose has a similar habit). Banded mongoose are very courageous creatures and a troop will attack a poisonous snake. When they are cornered by a predator, they spit like a cat and put up a defence. When they are at home, the female dominates the male.

Banded Mongoose live in troops averaging 30 individuals, and sometimes large colonies of up to 75. They can be heard from a distance as they march across their territory foraging for food: the rustling of grass, scratching of earth, and constant twittering help to locate them.

DISTRIBUTION
This communication between the troop is continuous, gets louder as individuals are separated, and becomes harsh and insistent when danger is nearby. When this happens, some will rise on their hindlegs to locate the source of trouble and then they will all scamper away either home or to a temporary shelter. They are diurnal, emerging from refuges in the warmth of the morning sun and returning to them in the late afternoon.