LENGTH OF HEAD AND BODY: 3.0 - 3.8 metres HEIGHT AT SHOULDER: 1.4 - 1.8 metres MASS: 996 - 1362 kilograms LENGTH OF FRONT HORN: 50 - 135 centimetres The black rhino feeds on leaves and twigs from a wide variety of shrubs in the acacia woodland community. It will pick up fallen fruits from the ground as well as taking those it can reach from trees. In the Ngorongoro Crater, in Tanzania, black rhino have been known to pick up and eat wildebeest dung when browse was in short supply. Such behaviour might have satisfied the need for minerals and trace elements as well as the use of the sustenance remaining in the droppings. 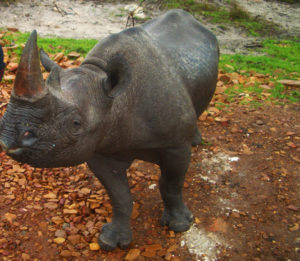 The black rhino will range freely in the rainy season; during the dry season the rhino will stay within 5 km (3 miles) of permanent water. They require one drink a day and in especially arid conditions, they can dig for water, up to 50 cm (20 in) deep, using their forelegs to excavate the soil.

Like the elephant and the white rhino, black rhinos often take on the colour of the soil on which they live, as they wallow in mud and cover themselves with dust.

Unlike white rhinos, black rhinos tend to be solitary: the only stable bond is that formed between mother and calf, but even that is fairly temporary, lasting only until her next calf is born. Other associations, such as male-female associations or between a number of individuals of the same age, are very transitory. They are not strictly territorial (ie: they do not actively defend territories), but they do tend to remain with a specific home range, which may overlap with the home ranges of other members of the population.

The size of their home ranges differ according to sex, age and the type of habitat, with immature animals usually occupying larger areas than adults. The only time they gather in groups is temporarily to wallow: five is the largest party usually seen together, though groups of as many as 13 have been recorded.

Although aggression between bulls is normal, they tend to actively avoid contact: sometimes serious fighting does occur, however, particularly over females in oestrus. Snorting and pawing are the prelude to a series of short charges, which will usually stop about 6 m (20 ft) short of impact. However, during a time of ecological stress in East Tsavo, before the drought in 1960/1, all the rhino were found to be wounded and some were killed in fights. This was evidently abnormal behavior produced by conditions of extreme hardship.

During the day they retire to the shade of thickets to sleep, either standing or lying with their legs curled under them. Black rhinos sometimes sleep lying flat on their sides; a position never adopted by the white rhino.
The black rhino seems to take a particular delight in crashing through cover; unlike the other animals of the bush in that it has no regular predators as an adult, it has no need to move stealthily. Like the white rhino the black rhino sprays urine and dung; it also leaves a scented trail consisting of flakes of mud and pieces of dead skin by rubbing against trees: this helps to communicate its presence, and possibly its identity, to the next rhinoceros who comes along.

Feeding in the morning and evening and sleeping in the heat of the day, the species has become largely nocturnal in most parts of its range. This is most likely the result of natural selection, which has eliminated the more diurnal individuals which were most likely to be shot. Wallowing plays an important part as it helps to lower body temperature, offers protection against biting insects when the mud dries, and helps with ‘rhino sores’, which are areas of cracked and often inflamed skin which occur most commonly in the hollow behind the elbows of the front legs.