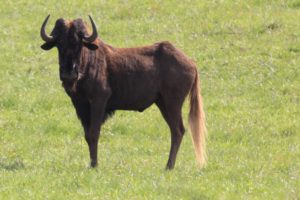 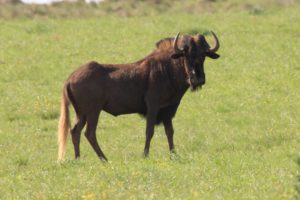 Black wildebeest, also known as ‘gnu’ because of the bellowing snort they use when alarmed, onced roamed in great herds of hundreds of thousands, but were brought to the brink of extinction due to over-exploitation and agricultural development. They are now off the danger list, due to being protected on numerous farms and game reserves. Black wildebeest are primarily grazers, but during winter they will browse to suppliment their diet. They are a species of the central plateau open plains, and are gregarious, with a social organization involving territorial males, female herds, and bachelor groups. The bulls carefully mark the boundaries of their territories with urine and faeces, and keep females in their territories by herding. Because there are few predators in their areas nowadays, most wildebeest calves reach adulthood. A single calf is born. The bond between the mother and calf is very strong, with the calf remaining close to her for the early part of its life.

DISTRIBUTION
Black Wildebeest are highveld antelope: they are not exactly black (as their name suggests), but rather buffy-brown, although they are darker in colour than their relatives, the blue wildebeest (which are actually grey). Their most obvious feature is their white tails, as well as their massive humped shoulders which slope to their lightly built hindquarters. Black wildebeest have high, shaggy manes, a distinct beard of long hair, an elongated patch of long hair on the chest that extends from between the forelegs almost to the belly, and probably the noisiest tail in the animal world. When alarmed, the animal swishes its long tail back and forth so vigorously that the loud whistling or hissing sound it creates can be heard for almost a kilometre. This is part of a ritual that may include loud snorting, highkicking with the back legs, and eventually a comical flight in which the herd will gallop off, wheel around, retrace its steps and halt, facing the real or imagined enemy.