SIZE: Shoulder height 30 cm, mass (m) 4 kg, (f) 4,5 kg. Horns 3 cm. COLOUR: Varies from a bluish grey to reddish-brown. The underparts, including the underside of the tail, are lighter and sometimes white. POTENTIAL LONGEVITY: 9 years RECORD LENGTH OF HORNS: 10 cm MOST LIKE: The Suni, but slightly smaller and distinguishable by its grey-brown rather than reddish-brown coat. Blue duiker females have short horns, whereas the suni females are hornless. HABITAT: Dense undergrowth or coastal bush. Water is an essential habitat requirement. 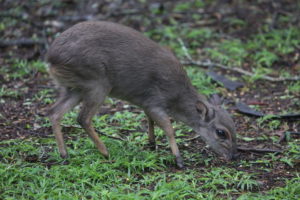 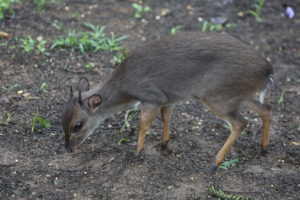 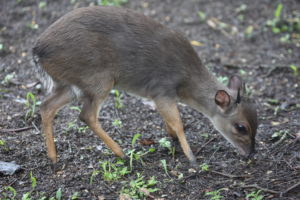 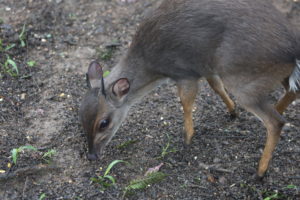 The blue duiker’s enemies are pythons, mambas, large birds and monkeys often provide duikers with fruit and leaves, and it is not unusual to see duikers feeding below a troop of monkeys in the forest. They are specialised in their habitat requirements, and throughout their wide distributional range they are found only in forests, thickets or dense coastal bush. They commonly live in pairs, sometimes with sub-adult offspring.

Unlike many kinds of buck, blue duiker drink frequently, and are dependant on available water supplies. The duiker has a perfect camouflage due to its colouring, but as it moves about in the bush it flicks its tail, thereby exposing lighter hair underneath, which can be a giveaway to predators in the area. The newborn lamb has a much lighter coat, and is therefore also vulnerable to predation. The mother normally keeps her young hidden in the undergrowth. Usually a single lamb is born in September or October.

DISTRIBUTION
The Blue Duiker is the smallest antelope in Southern Africa and is extremely shy and normally difficult to spot. In certain light these duikers have a faint bluish sheen to their coats, hence their name.