SIZE: Shoulder height (m) 90 cm, (f) 95 cm; mass (m) 61 kg, (f) 58 kg. Both sexes have horns. COLOUR: Rich, dark brown; darker on flanks and upper limbs, which also have a purple gloss. Unbroken white blaze from forehead to muzzle. Pure white rump, base of tail, underparts and legs white from knees downwards. RECORD LENGTH OF HORNS: 43 cm MOST LIKE: The Blesbok, which has a duller, more reddish brown coat, and which lacks the very obvious white patch on the rump. The blaze of the Bontebok is undivided. HABITAT: Open fynbos veld with grasses. 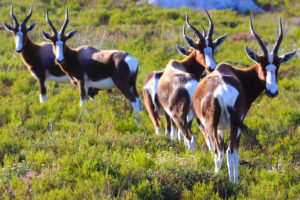 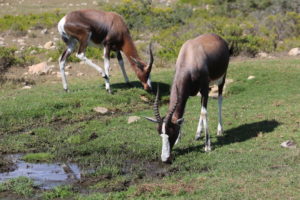 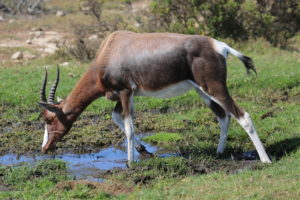 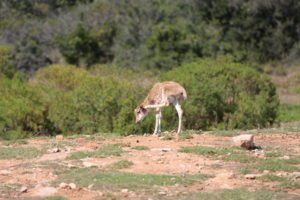 Bontebok are gregarious, living in either mixed herds or bachelor herds, and are diurnal grazers. During the mating season, bontebok males entice females into their territories, parading their charms with an extravagant courtship ritual, in which the male bows down his head and lifts his tail over his back. Then, moving in tandem with the female, he rotates in small circles before copulating with her.

Fights between bontebok are low-key events, and consist of two males kneeling and perhaps prodding at one another with their horns for just a few seconds, before one of them – usually the intruder – runs off. Bontebok may be seen during the heat of the day, standing in groups with their heads held low and facing the sun. The explanation for this behaviour is not clear. A single lamb is born in spring after rain, when the grass cover is recovering after the dry winter. Young females remain with their mothers as members of the herd.

DISTRIBUTION
Bontebok and blesbok are actually sub-species, but they are well-known as distinct antelope, and worth separate mention. This handsome, strikingly marked antelope, brought to the brink of extinction by overhunting last century, has made a significant comeback – thanks to a group of far-sighted farmers who protected a handful of survivors in the Bredasdorp district in the 1830’s. The Bontebok is now off the endangered list.