SIZE: Shoulder height (m) 76 cm, (f) 65 cm; mass (m) 62 kg, (f) 60 kg. COLOUR: Reddish to grey-brown coat, with an erectile, off-white crest of bristly hair along the top of the head and neck, and dark tufts at the tip of the ears. MOST LIKE: The heavier Warthog, but distinguishable by its long, thin ear tufts, absent in the warthog. Bushpigs are active at night, warthogs by day. POTENTIAL LONGEVITY: 20 years HABITAT: Forest, thick bush or reed beds usually near water, but may range great distances in search of food. 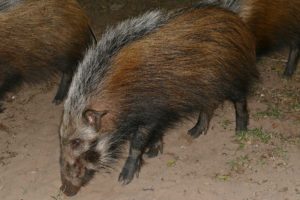 They are gregarious but secretive: bushpig families numbering as many as 12, but usually 6 – 8, avoid human and predatory interest by sheltering in dense, almost inaccessible undergrowth. Soon after dusk, they leave their hides, travelling along well-worth paths through the bush in search of food. Their diet consists of roots, fruit and vegetables, as well as a variety of insects, eggs, reptiles and carrion. They root with the upper hard edge of the shout in a similar way to warthogs, and often follow vervet monkeys and baboons around so they can eat the fruit they dislodge. Bushpigs wallow in mud which keeps them cool, as well as protecting their skin from insect bites. The dominant boar will guard and lead the piglets to feeding areas, and will challenge and aggressively drive other boars off their feeding grounds. The sow burrows into carefully constructed heaps of grass to deliver three or four young. Although staunchly defensive of their offspring, the boar and sow become intolerant of them after about six months, and drive the young pigs out. Young bushpigs are hardier than young warthogs and do not require burrows to shelter in, as they are better able to control their body temperature.

DISTRIBUTION
Bushpigs vary greatly in colour throughout their range. Seldom seen, but easily identified by their ominous, harsh grunt and piglike appearance, this wily night-time raider with an appetite for domestic crops infuriates farmers with destructive forages into nearby farmlands. Aggressive and courageous, bushpigs are positively dangerous to pursuing dogs, as the boars often turn on them and slash at them with their razor-sharp tusks.