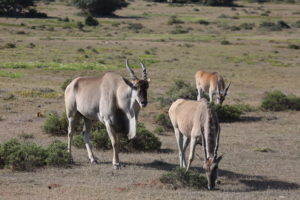 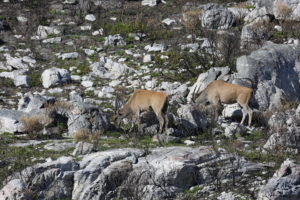 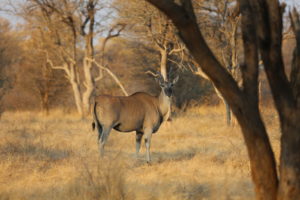 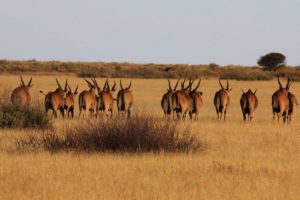 Eland are gregarious, and, while they usually occur in small herds, they can aggregate into great herds, numbering up to a thousand animals, and are known to migrate over long distances in the drier areas of the subcontinent. They are usually found in bush country, where they use their prominent, spiralled horns to break off branches beyond the reach of their jaws, and their front hooves to dig up roots, melons and tubers. A single calf is born, usually in early summer, and, within a few hours, it is able to run with its mother. Mothers and calves recognise one another’s particular clicks or grunts, and a mother will suckle only her own calf, chasing other calves away by buffeting them with her horns. Calves are born at regular intervals of 9 months. After the calf is weaned (at about 4 months), the female will leave it for increasingly long periods of time in a nursery herd. Within these nursery herds the young tend to form bonds with other calves which are stronger and more lasting than the mother-calf bond. The bulls often associate together at this time.

The Eland is the largest of the African antelope. Its name comes from the Dutch ‘eland’, which means ‘elk’. They are usually dun-coloured, with short body hair, and a longer tuft of brown hair on the forehead, which is often matted, and has a strong smell due to a glandular secretion. An instant giveaway for an eland trying to remain inconspicuous is the curious, loud clicking sound its knees make when it walks or trots.

This huge, oxlike animal is shy and timid, but becomes very tame in captivity. Nature has given the eland a unique way of coping with extremes of hot and cold: not only does it rarely drink, but it conserves moisture by not sweating, thereby allowing its body temperature to rise slightly during the day. In spite of its great size, this gentle giant can walk faster than a man, gallop at great speed for short distances, and leap gracefully over fences up to two metres high. They are well adapted to arid environments, but cannot live where there is no succulent forage available. Due to their mobility and their high protein requirements they adapt their diet and feeding habits to suit their circumstances, and will graze in summer and browse in winter.