SIZE: Height to top of head (m) 5 m, (f) 4,5 m; mass (m) 1 200 kg, (f) 800 kg. COLOUR: Well-defined, irregularly shaped patches varying from fawn to dark brown, patterned on a paler background that shades to white on the lower legs. Colouring darkens with age; varies widely geographically. SPEED: 50 km/hr GESTATION PERIOD: 14 -15 months POTENTIAL LONGEVITY: 28 years MOST LIKE: Unlike any other animal. HABITAT: From sparsely wooded scrubland to thickly over-grown bush country, especially where there are acacia and other thorn trees to provide the giraffe's staple diet of leaves, and to provide camouflage. 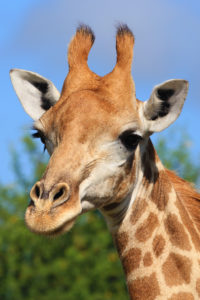 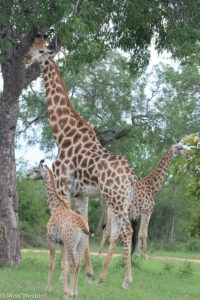 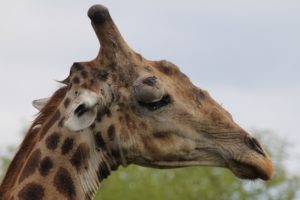 Social bonds are not strongly developed, and herd structure seems to be loose, made up mainly of females and young, although mixed herds and bachelor herds are also found. There is apparently no consistency in the ratio of males to females in a herd, and herds rarely consist of the same individuals for more than a few days.

They do not defend a territory, and have fairly large home ranges. A newborn giraffe can weigh in at some 100 kg. The calves lie hidden in a resting area, and when slightly older often form small nursery herds guarded by one or two females. Young calves are playful, and run together kicking up their legs. Mortality among giraffe calves is high, and may reach 70 % in some areas.

Nature’s skyscraper, the Giraffe is the world’s tallest animal. Its carotid artery and jugular vein, running down the long neck from head to heart, are equipped with special valves to keep the blood from alternately flooding and evacuating the brain as the head is raised, or lowered to drink water.

DISTRIBUTION
Giraffe occur in a wide range of dry savanna associations ranging from scrub to woodland, providing that these include the particular range of food plants necessary to cover their seasonal requirements. They are predominantly diurnal browsers, and eat a wide range of food plants, but they do graze occasionally on fresh, sprouting grasses.
The giraffe’s defensive weapon against its main enemy, the lion, is a kick that packs a powerful, hoofed punch. Giraffe have an unusual, ungainly gait: the two legs on each side swing almost in unison. At full gallop, with the tail twisted over the hindquarters and the neck swinging to and fro in rhythm with the legs, it can achieve a speed of 56 km/h. A sleepy giraffe may take a nap standing up, with its head supported in the fork of a tree. Even if it lies down it will usually keep its neck upright. If a whole troop of giraffes are resting, they orientate themselves in different directions so as to be prepared for danger from any direction.