SIZE: Shoulder height 75 cm, mass (m) 60 kg, (f) 32 kg COLOUR: Ground colour is off-white to golden, with black spots on the legs, shoulders, head and hindquarters, and irregular, light-centred 'rosettes' scattered profusely over the back and sides. GESTATION PERIOD: 3 months (90 - 100 days) POTENTIAL LONGEVITY: 21 years MOST LIKE: The Cheetah, but the leopard is heavily built and has no tear marks from corner of eye to corner of mouth. The leopard's main body markings are rosettes and not solid spots like those of the cheetah. HABITAT: A very wide range of habitat tolerance, from rainforest to semi-desert, including savanna, mountainous areas and rocky hills. 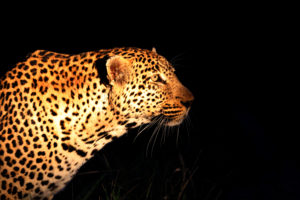 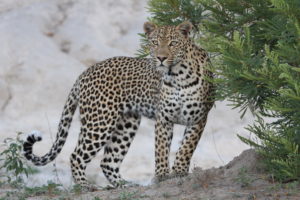 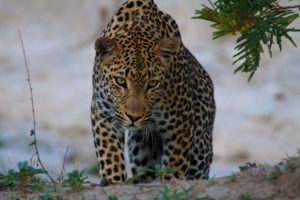 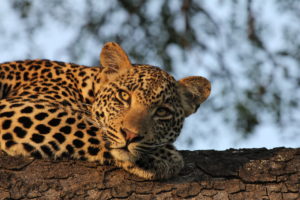 Leopards have a very wide habitat tolerance. They generally occur in rainforests, areas with rocky hills, mountain ranges or temperate forest, but can even occur in semi-desert, where they frequent watercourses and rocky outcrops. In arid regions they are independant of water, deriving sufficient water from the bodies of their prey, as well as tsamma melons, but throughout their range they will drink if water is available.
Leopards reach their highest densities in rainforests, to which they are well adapted, as they are excellent climbers, solitary hunters and are equally at ease by night or day. There is a lack of competition from other large predators in rainforests, and the leopard supplements its diet of buck, forest hogs and similar animals with the large selection of primates and rodents: they also eat birds, reptiles and fish. Leopards also inhabit high altitudes, such as the Virungas, Mount Kenya and Mount Kilimanjaro, where their major prey is rodents and hyraxes; arid regions such as the Kalahari desert; as well as regions that are covered in ice and snow during the winter.

The Leopard is the largest spotted cat in Africa, and is a powerful symbol of the wild places of earth: it is solitary, beautiful, graceful, strong, agile and cunning. Leopards are the most widely distributed and successful of the world’s large cats, inhabiting more diverse habitats than any mammal, with the exception of man and certain rodents.
Leopards vary in size depending on location: leopards of the western Cape are smaller than those found in the Kruger National Park. It is thought that the woodland leopard is small and dark compared with its counterpart from more open country, but it is difficult to validate this, as size is affected by nutrition.
No two leopards are exactly alike, either in their markings or their background colour, but they do have black spots on the limbs, flanks, hindquarters and head, with rosettes on the remainder of the body. The tail is over half the length of the body, and is either spotted or rosetted.

The underparts of both the body and tail are slightly lighter in colour than the upper-parts, as this helps with light deflection in terms of camouflage.
Although smaller than a lion, the sleuthlike leopard is often more feared. It is fiercer, braver and very intelligent: a perfectly streamlined killing machine with exceptional hearing, good eyesight and sensitive, extra-long whiskers which help it avoid obstacles in the dark. The body is compactly built and cat-like, the head massive, and the strong, very sharp, curved claws are fully retractile. The ‘dew claw’, which is the claw of the first digit on the front feet, is used to hold large prey. The claws and first digits on the front feet do not mark in the spoor. The leopard is also a remarkable athlete, capable not only of swimming across rivers, but also of leaping onto rocks up to 3 m high, carrying prey as heavy as itself, as well as hoisting heavy carcasses into the branches of trees. Leopards are adept climbers: they climb even smooth barked trees with ease, and move with confidence among swaying branches.