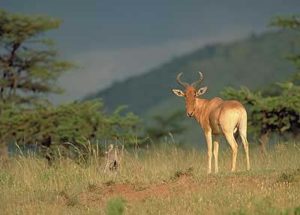 Lichtenstein’s hartebeest rarely occur in herds of more than 10 individuals. They are territorial, and the territories are maintained throughout the year, as long as the dominant males are strong enough to defend them during the rutting season. Territories are marked by horning the ground: males drop to their knees, then dig up the soil with their horns, while rubbing their preorobital glands on it; dung piles probably also play a role in territory marking. The dominant male will often maintain a position downwind of his females and their young, and usually on elevated ground so that he can keep them in sight. In times of danger the rest of the herd flees, while the territorial bull brings up the rear, stopping every now and then to look back at the danger, which often costs him his life. During the mating season, restless bulls leave their own area and earnestly try to entice cows away from other territorial bulls. This leads to noisy confrontations and prolonged fighting often takes place.

Lichtenstein’s Hartebeest is named after the famous naturalist and traveller, W.H.C. Lichenstein, who travelled in southern Africa between 1803 and 1806. They are similar to the red hartebeest, but are yellowish-tawny in colour, with an indistinct saddle of rufous coloured hair on the upper parts of the body, which extends from the shoulders to the base of the tail. Some individuals have a dark patch on the forehead and an indistinct dark band on top of the muzzle.

Lichtenstein’s hartebeest have a habit of rubbing the sides of their faces on their flanks, which leaves a dark patch behind their shoulders. They have humped shoulders which give them a sloping appearance, similar to that of the red hartebeest.