SIZE: Shoulder height (m) 0,8 m, (f) 0,7 m; mass (m) 30 kg, (f) 28 kg. Only males have the short, ridged, forward-curving horns. COLOUR: The soft, woolly coat is reddish grey or grey fawn. Undersides, including underside of short brown bushy tail, are white. Black gland patches under ears. POTENTIAL LONGEVITY: 8 years RECORD LENGTH OF HORNS: 23 cm MOST LIKE: Reedbuck, but slightly smaller, much lighter and male has shorter horns. Mountain Reedbuck also lack the black or dark brown stripes found on the front of the forelegs of Reedbuck. HABITAT: Dry, grassy hill-slopes and lower mountain-slopes, usually near water. Mountain Reedbuck are medium-sized antelope, usually with greyish upperparts and pure white underparts. They have black glandular patches under the ears, which play a role in scent marking. Mountain Reedbuck inhabit the dry, grass-covered, stony slopes of hills and mountains, particularly where there is cover such as bushes or scattered trees. 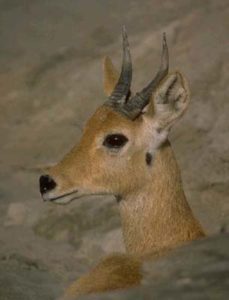 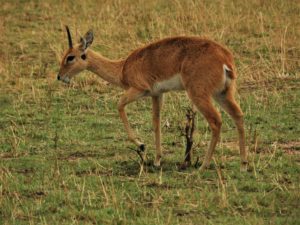 They are almost exclusively grazers, and are adapted to digesting a low quality diet of coarse grasses, particularly in the dry, winter months. They are dependant upon drinking water. Mountain Reedbuck are closely related to Reedbuck, but, unlike the Reedbuck which is a grassland species, the Mountain Reedbuck is found on or near mountains or rocky hills. Another difference between the two species is that Mountain Reedbuck are gregarious, and are normally found in small family parties of three to five individuals, although they are often seen in herds numbering up to a few dozen, sunning themselves on the slopes of mountains: Reedbuck are solitary.

Mountain Reedbuck have their own answer to bad weather: they merely turn their hindquarters to the direction of heavy wind and rain; alternatively, they lie down on a sheltered slope until the bad weather is over. The social organisation consists of territorial males, non-territorial males, herds of females with young and bachelor groups. Some males occupy their territory throughout the year, only moving off either when their territory is burned, or to establish contact with other males: they tend to be particularly nervous when they stray outside their territory limits.

Female herds are loose associations, with the females and their young moving from one male territory to another. A single calf is born, and is hidden by the mother for two to three months. The mother approaches the calf once or twice a day to clean and suckle it; after she leaves the calf moves to a new hiding place to prevent scent marking: this helps protect it from predators. The bond between mother and calf is strong, but is broken when she has a new calf: if this new calf dies, the bond may continue for longer. When the calves are strong enough to follow their mother, they join the herd.