SIZE: Shoulder height (m) 0,8 m, (f) 0,7 m; mass (m) 74 kg, (f) 61 kg. Only males have the lyre-shaped horns, which are much smaller than those of the lechwe. COLOUR: Golden brown or brownish orange-yellow with no distinct markings; white or off-white on the undersides and on the throat. MOST LIKE: The Lechwe, but smaller. The puku is also more brightly coloured and does not have the lechwe's black markings on its forelegs. HABITAT: Open grassy areas near water, but not wide flood plains. Does occur in bushy areas and low woodland very close to water, as long as there is an intervening grassy strip. 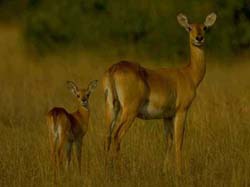 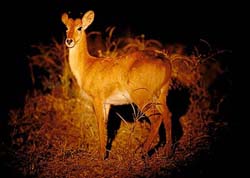 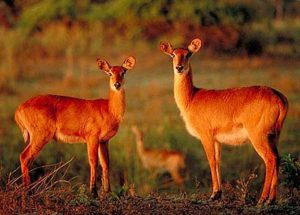 Puku are predominantly grazers, and feed around sunrise and sunset. They are gregarious, occurring in herds averaging six individuals, but sometimes with up to 28 animals. Occasionally the smaller herds combine, forming large groups of several hundred. If danger threatens, they will whistle in alarm, trotting off nervously with their heads held erect. They also respond to the alarm signals of impala, with which they often associate. Territorial puku males herd their harems into well-defined territories, and although they tend to chase off other males, they sometimes tolerate small bachelor herds, provided their members have no sexual interest in the females. Fights between territorial males and their challengers usually result in ritualised horn-clashing only. Puku cows are not very good mothers, and the mother-calf bond is not strong. Often mothers will ignore the frantic, high-pitched bleating of their calves, and they rarely defend their young in the face of danger. Even very young calves act independently of their mothers, often running in a different direction to them when disturbed.

DISTRIBUTION
Puku are medium-sized antelope, usually golden-brown or orangy-brown in colour. They resemble the lechwe, but they lack the lechwe’s brown foreleg markings, and puku are smaller. The males are larger than the females, and they have lyre-shaped horns. Puku have disappeared from many parts of their former range, although they are protected in some reserves. They are usually found on grassy plains near rivers, such as floodplains.