SIZE: Length 55 cm, mass (m) 3,75 kg, (f) 3,55 kg. COLOUR: Various shades of brown, from dark brown to yellow-grey. Neck and flanks lighter than back. Throat and belly lighter brown, but not whitish. A patch of long black hair covers dorsal gland in the centre of the back. GESTATION PERIOD: 7. 5 months POTENTIAL LONGEVITY: 7 years MOST LIKE: Tree Hyrax, but with shorter hair and black, not white, hair over the dorsal gland. HABITAT: Rocky outcrops such as koppies, krantzes and mountain slopes. 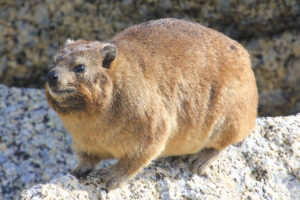 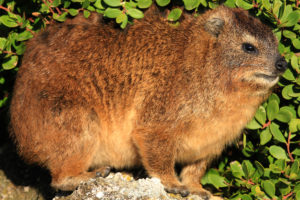 Hyrax inhabit rocky outcrops, and prefer to live in rock fissures and among boulders, particularly those associated with bushes and trees of species which provide browse, which forms the majority of their diet. It is essential that these rocky outcrops contain crannies and crevices in which the dassies can shelter. It has thickly padded feet which are kept moist by a glandular secretion: this helps the hyrax’ mobility on the steep and smooth rock surfaces upon which they live. These animals are gregarious, and congregate in colonies of up to 50. They are territorial; one male associates with up to 17 adult females and juveniles, and some young males. They are diurnal, and enjoy basking in the sun, spending much of their time conserving their energy. In the cold parts of the day and at night, they go into a tightly packed huddle together in their dark shelters in order to minimize loss of body heat. They are herbivorous, and eat a variety of grasses, forbs and shrubs, including some that are poisonous to other animals.

In a hyrax colony it is the female that is the sentry: her high pitched cry sends the colony scurrying to the shelter of rocky crevices. Hyrax are extensively preyed upon by lions, jackals and eagles: the latter swoop down out of the morning sun to catch them. To counter this, the rock dassies’ eye has a thin moveable membrane which shields the pupil and allows vision directly into the sun. The dassie is an aggressive little animal with sharp incisors. The hair of the dorsal gland is capable of rising when the animal is stressed, much the same way as a dog’s hackles. Two to three young are born: within a day they are capable of agile movement over the rocky terrain.

The Rock Hyrax gets its name from the Dutch for small badger: dasje, which is a more accurate description than the English ‘rock rabbit’, as the dassie has very tiny ears and no tail. It is also referred to as the ‘Dassie’. Dassies are more closely related to the dugongs and elephants than to either badgers or rabbits.