The Scrub Hare is bigger in the south-western part of South African distribution (averaging 4 kg) than to the north (averaging about 2 and a half kg). The upper fur is mottled-grey whilst the underparts are almost white. Their long ears are grayish, and coupled with the outstanding black and white tail it cannot be missed whilst in flight. 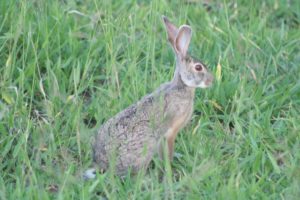 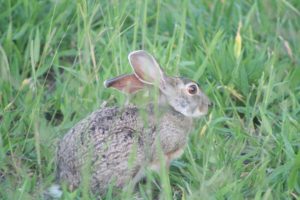 Scrub Hares ave a diet which mostly consists of grass shoots but will eat leaves and even dig for roots and rhizomes at times of drought and food shortages.

Young are born between spring and autumn and can have multiple litters of two to three young at a time. The more favourable the conditions the more likely they are to breed more often, especially after a good rainy season.

Scrub hares are usually solitary in nature but during oestrus, numerous male will accompany her and compete to mate.
They prefer a habitat of grassland and savanna, which gives them good cover from predators and ample food.
The are widely distributed in the southern African region but avoid forests, coastal areas and the more arid areas.

During your safari night drive you are most likely to have a Scrub Hare break cover and run in front of the headlights, darting in a zigzag manner, which is usually its successful method of out maneuvering its enemies..