SIZE: Length (including the tail) 60 cm, (f) 55 cm, mass (m) 640 g, (f) 460 g. COLOUR: A wide colour range: from reddish-brown to yellowish or dark brown to olive grey, the body colour being speckled with grey. Underparts are less speckled and the tip of the tail is black or reddish-black. Their eyes are yellow. MOST LIKE: Small Grey Mongoose, but slightly smaller and more slender, and with the characteristic black tipped tail, which is lacking in the small grey mongoose. HABITAT: From arid areas (though not deserts) to well-watered ones, and from open country to woodland, but not found in dense forests. 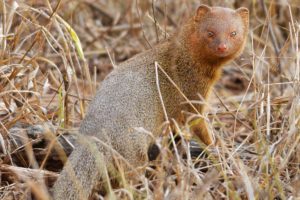 Although it can climb trees when being chased or searching for food, it is normally earthbound, making its home in the shelter of rocks or stones, fallen trees and other vegetation, or in the disused burrow of an aardvark. When this animal runs for cover, it holds its body flat and its tail horizontal, but just as it reaches cover, the black tipped tail flicks up vertically. It tends to use well-worn tracks, which make it vulnerable to birds of prey.

It can distinguish between predators such as eagles and other, harmless birds such as crows, and will often freeze until it has identified the danger. The slender mongoose’s diet and method of hunting are similar to those of the small grey mongoose. The young are born in holes in the ground, or in crevices, under tree roots, or in any substantial shelter available.

DISTRIBUTION
The Slender Mongoose is a solitary, diurnal animal with a long, sinuous body (hence its name), a long slender tail and squirrel-like mannerisms. When alarmed, it will sit up on its hindlegs to look around with its head held high.