SIZE: Shoulder height 52 cm, mass 11 kg. Only the ram has horns, usually 9 cm in length. COLOUR: It varies from a reddish-brown to a lighter reddish-fawn. A dark patch is found above the nose and a dark marking on the forehead. The throat, eyebrows, abdomen, underside of tail and insides of legs are white. The upperside of the tail is reddish-fawn. RECORD LENGTH OF HORNS: 18 cm GESTATION PERIOD: 7 months MOST LIKE: The Oribi, but smaller, with longer ears, a shorter neck and with a reddish-fawn upper surface to its tail (black in the oribi). HABITAT: It prefers flat, open country, grassy or lightly wooded, and avoids mountain slopes and desert areas. Cover is essential. 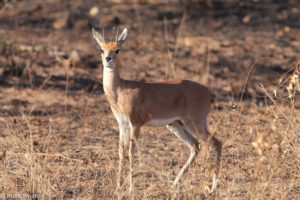 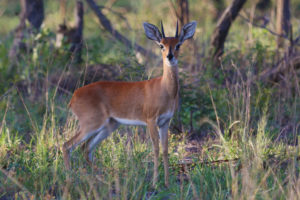 Steenbok are mixed feeders, preferring a rich diet of easily digestible forbs and grasses. When frightened it lies down quietly in the grass, but if disturbed it zig-zags through the undergrowth with its head forward. Occasionally it may hide in an aardvark hole. The steenbok has many enemies, including jackals, wild dogs, leopards, cheetahs, martial eagles and pythons. When the steenbok is distressed it emits pitiful screams.

Steenbok establish well-defined but overlapping territories, which both sexes will defend against trespassers, and mark their territory using glands between the hooves on the front and back feet, a gland between the two halves of the lower jaw, and with glands just in front of the eyes. Steenbok are normally solitary, except when a mother is with her young or when a male and female are courting. A single calf (rarely twins) is born at any time of year.

DISTRIBUTION
The Steenbok is a graceful little buck, with large ears, long, slender legs, a slim body and a tiny tuft of a tail. It gets its name from the Afrikaans steen (meaning ‘brick’): a reference to the overall colour of the species. It is often sighted feeding at the side of a newly constructed road, grassland clearing or firebreak (wherever there is fresh, new vegetation), particularly in the early morning or evening.