SIZE: Height when sitting erect (m) 50 cm, (f) 45 cm, mass (m) 5,5 kg, (f) 4 kg. LENGTH OF TAIL: 65 cm COLOUR: Grey coat with yellow tinge. Black face, hands, toes and tail tip. Band of white across the forehead and goes down the sides of the face to the chin. The underparts are whitish or white. POTENTIAL LONGEVITY: 24 years GESTATION PERIOD: 7 months MOST LIKE: Samango Monkey, but is slighter with paler shorter coat and black not brown face. HABITAT: Riverine and savanna woodland with cover and fruit-bearing trees. 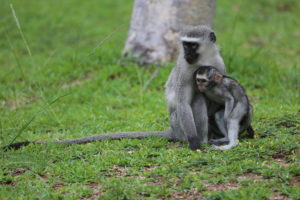 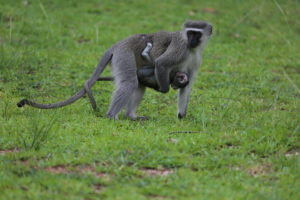 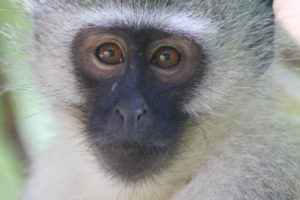 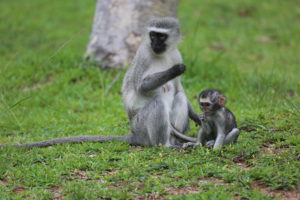 Authority is maintained with aggressive threats. The desire to groom and be groomed has a duel function, as it rids the monkeys of parasites, and is also an important factor in troop cohesion. Grooming usually takes place mid-morning after the first feeding session, when individuals are resting in the sun.
The males defend the troop while the females tend to their young. The females are extremely maternal, and have been known to adopt young from other troops; a bereaved mother will often keep the body of her infant with her for several days. Vervets sleep together in groups of two or three in rock crevices or on the branches of trees. They are agile climbers and forage constantly in trees in search of food. They are mostly herbivorous and eat fruit, flowers, seeds and leaves, although they will also eat spiders, grubs and locusts. Their chattering changes to loud coughing and agitated screaming when alarmed. There is no fixed mating season, and usually a single young is born (rarely twins).

DISTRIBUTION
The Vervet Monkey is an exciteable, energetic animal that is commonly found in wooded areas, in both nature reserves and near human settlements. They are diurnal and gregarious, living together in troops of 15 – 20 animals, which are dominated by a mature male. Like baboons, they have a highly developed social structure, although their hierarchy is slightly more flexible than that of baboons.