The huge South Luangwa National Park is so wild and remote and full of animals that it would be hard to exceed the safari experience found here. It is one of Africa's most unspoiled places with enormous spaces, a wide diversity of habitats, and a high game density and rarity of wildlife rarely seen in other game reserves. The survival of the valley depends on the winding Luangwa River, crowded with hippos, crocodiles and wading waterfowl, and its numerous tributaries that course through the park.

Guided walking safaris were initiated in the Luangwa Valley and continue to be the most popular way to explore this park.

There is nothing quite like getting the earth under your feet and meeting Africa’s animals on their own ground! There are a number of famous name specialised guides (such as…Robin Pope and….- I don’t know if you want to mention names here and if so which ones?) who have perfected the art of walking safaris and who combine earthy bushwhacking in big game country with comfortable tented camp accommodation. Some camps are so mobile that they are dismantled and reassembled in another spot, before you have reached the end of your walk. Whatever the luxury, you cannot keep Africa at bay and you will encounter everything both big & small, including bugs and biting insects. This is a place for the real adventurer, but it is often said that a safari in South Luangwa is, “the best Africa has to offer.”
Wild Dog

ANIMALS AND BIRDS
There is such an abundance of animals in this park that it could be called crowded! Antelopes, wildebeest and zebra congregate along the river and on the open savannah grasslands in the north, where most safari camps are located. The muddy Luangwa is home to hundreds of crocs and often over 100 hippo in a single pool. The Nile Crocodile is the world’s largest reptile – maxing at around 15ft ( metres) long and 100 years old.

Night drives are renowned for sightings of leopard and lion on the hunt. Baboons and vervet monkeys seem to be everywhere and even rarely seen animals like the honey badger and civet, are likely to be seen. Large hunting packs of African wild dog – who require a large traversing area – travel easily through this park and are a special sight due to their endangered status. Thornicroft’s giraffe are indigenous to the park, and are one of 8 different races of giraffe in Africa. They have darker muzzles and are slightly smaller than their cousins. Even the zebras are a sub-species of the common plains (or Burchell’s) zebra, and lack the muddy-brown shadow stripe of its neighbours.

With over 400 species of birds recorded here you could easily see over 100 different species in a three day visit. Some particularly beautiful ones are; carmine bee-eaters, kingfishers, lilac-breasted rollers, bateleur eagles, saddle-billed storks, crowned cranes and fish eagles.

SEASONS
Rainy Season: The South Luangwa is inaccessible during the rainy season from December until the last rains in about April. After one night of heavy rain and thunder, the Luangwa River could rise by several metres to form a lake that was not there the day before.
Dry Season: May to August are the colder winter months with warm days and cold nights. After that it gets hotter and dryer and by September and October it is very hot. By this time the bushes have wilted and the earth is bone dry, so animals assemble along the river and at remaining waterholes. These hot dry months are the best for game viewing.

• Walking safaris with expert guides
• Night drives with good sightings of leopard
• Truly wild and remote setting
• An abundance of animals
• Encountering a lion or herd of elephants on a walk
• Huge pods of hippos
• Exciting bird watching
• Mobile camps with all the luxuries
• Unusual animals sightings including wild dog, honey badger, civet

FACTS
Off-road and night drives are permitted
Most of the safari camps in the north of the park are closed from November to June because of unusable roads and muddy conditions.
This is a malarial area
The park covers an area of 3,494 ²miles (9,050 ²km) 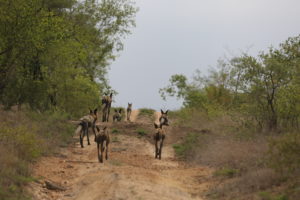