The Chobe River has its origins in the highlands of Angola and once it enters Botswana, it goes through several name changes. It enters as the Kwando River and immediately becomes the Linyanti, then the Itenge and is finally called the Chobe River. Knowing this may avoid confusion when looking at maps or reading information.

The Chobe River area contains an interesting variety of habitats and is rich in plant life, with mopane woodland, mixed combretum, sandveld, floodplain, grasslands and riverine woodland. Many trees have suffered considerable damage from the high numbers of elephants, who push them over and rip off the bark – and some woods have been totally denuded.

The most popular area in and just outside Chobe National Park is the short 9-mile (15km) stretch of Chobe River from Kasane town to the Serondela campsite. Few people come to Chobe without taking a trip on this river to see hundreds of hippopotamuses and crocodiles. Both hippo’s and elephants epitomise this park more than any other animals and are often featured on the cover of brochures to the area. The only subject more photographed in Chobe are the exquisite sanguine sunsets sinking slowly over the water.

Chobe National Park is probably the most affordable of Botswana’s parks and with the lure of excellent game watching both on and beside the river, the well frequented areas can become quite crowded.

ANIMALS & BIRDS
Notwithstanding the elephants, Chobe has some of the finest game viewing in Africa. It is notable for huge herds of buffalo and zebras, lechwe, Chobe bushbuck and being the southernmost point where puku antelope can be seen. Where there are buffalo, lions are never far away and there is a good chance of seeing large prides who laze around in the shade all day and only yawn themselves awake at dusk. Hyena and leopard also hunt at night while cheetah are diurnal predators.

Chobe is rich in bird life with the Pel’s Fishing own a favourite for bird watchers and the peculiar strangely beaked African skimmer another speciality.
Kudu Male – Pic: Norman Goldberg

African fish eagles are common and their distinctive cry is as evocative of the African wilderness as the roar of the lion.

SEASONS
Rainy season: November to March with a peak during January and February. Rains often only begin in mid- December. Travelling through areas of clay soil can be very difficult at this time, but much of the Chobe River area is accessible. These are the warmest months with temperatures and humidity high and mosquitoes abundant. The wild flowers that emerge during the rains are quite stunning and bird life is abundant. Many animals give birth during this period of abundant grazing and if you are prepared to negotiate some mud, the rainy season in Chobe is a delightful time.

Dry season: May to October is dry and as the months progress and water dries up inland, animals congregate in huge numbers along the river. Game is at its most dense and easily visible during the dry season and most visitors come at this time. October is the hottest month and although it is the best for game viewing, it is also the most uncomfortable as the expectation of rain is high and the heat can be oppressive.

· Elephants by the hundreds especially by the Chobe River during the dry season
· Sundowner river cruises culminating in spectacular Chobe sunsets
· 440 species of birds
· Big cats may be seen stalking buffalo on the grassy floodplains
· Fishing on the Chobe River for 20 different species of edible fish
· Spectacularly positioned safari lodges and tented camps along the Chobe River
· Rare Pel’s Fishing owl can be spotted at night
· Small flocks of African skimmers, only found in this region are best seen in June or July
· Exceptional photographic opportunities

FACTS
In line with many of Africa’s national parks, off-road and night driving is not permitted.
Chobe National Park covers 7 270 square miles (11,700 square kilometres)
This is a malarial area.

END_OF_DOCUMENT_TOKEN_TO_BE_REPLACED 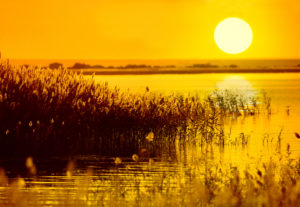 The Chobe River has its origins in the highlands of Angola and once it enters Botswana, it…