The Linyanti River (which is later named the Chobe River), forms a natural border between Namibia and Botswana.

The river’s course is smooth and gentle until it hits a volcanic fault line which causes a dramatic 90-degree change of course from south-east to north-east. Inside the right-angle corner created at this juncture, a swamp has formed (on the Namibian side), similar in appearance to the Okavango Delta, with papyrus lined waterways leading to towering riverine forests of giant ebony and marula trees.

On the southern banks of the Linyanti River (in Botswana), is the private Linyanti Wildlife Reserve. Here the marsh subsides into lagoons and steadily flowing rivers with riverine forests of jackalberry and sausage trees leading to open grasslands, and dry inland wooded areas.

ANIMALS & BIRDS
The Linyanti Reserve is highly populated with animals particularly in the dry winter months when elephants concentrate in enormous numbers at the rivers and waterholes. Thousands of zebra spend the winter in the Linyanti before heading south to the Savuti in November in expectation of summer rains and good grazing. The particularly beautiful sable and roan antelopes are found here and red lechwe and the aquatic sitatunga antelope inhabit the wetlands.

The main predators are lion, leopard, cheetah, wild dog and hyena. A smaller carnivore and efficient predator sometimes seen, is the serval. This feline catches rodents and birds by silently pouncing on them and has a creditable 50% success rate. Bat-eared foxes are the cutest of the small carnivores and prey on insects, scorpions, mice and small birds.

Birdlife is abundant here and particularly vocal with a magnificent dawn chorus. Daytime noises include incessantly grunting hippos and trumpeting elephants, while the night brings roaring lions and laughing hyenas.

Dry season: May to October is dry and as the months progress and surface water becomes scarce, animals congregate in huge numbers along the river. Game is at its most dense and easily visible. October is the hottest month.
Linyanti aerial. Pic: Russell Weston

FACTS
Linyanti Wildlife Reserve covers and area of 275 000 acres (111 288 hectares)
It is a private reserve so night drives and off road driving is offered
This is a malarial area.

END_OF_DOCUMENT_TOKEN_TO_BE_REPLACED 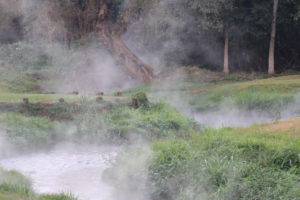 The Linyanti River (which is later named the Chobe River), forms a natural border between…