Nxai Pan National Park lies just north of the Maun-Nata main road and adjoins the Makgadikgadi Pans National Park on its northern border. The pan itself is another fossil lakebed about 15 sq. miles (40sq. km) in size. The landscape is dotted with clusters of umbrella acacia trees and mopane woodland in the north. During the rains from November to April, the pans become covered in grass - a landscape typical of the Kalahari.

Livingstone passed this way during the middle of the 19th century and as traders and explorers followed, it became an important trade route. Kgama Kgama pan, in the centre of the park, held water at that time and many travelers rested here and replenished their water supply before continuing across the Kalahari towards the Linyanti.

The famous artist Thomas Baines arrived in 1861, and painted an unusual group of Baobab trees, which became known as ‘Baines Baobabs’. It is rare to see these trees so close together and as one was growing on its side, Baines named his painting ‘The Sleeping Five’. The Green brothers passed this way too and to this day their inscription into the bark, ‘Green’s Expedition 1858-1859, can clearly be seen. The Baobabs are not far from the main road and are worth a visit, but be wary of venturing there when the ground is wet.

ANIMALS & BIRDS
Nxai Pan is well known for a huge springbok population, as the short-cropped grasses can testify, and extraordinarily large herds of giraffe with up to 30 in a group. Also to be seen are blue wildebeest, gemsbok, eland, greater kudu and red hartebeest. The more commonly seen predators are spotted hyena, cheetah, leopard and jackal with the elusive brown hyena a rare treat. During the rains buffalo and elephants may also be seen. Once the rains start, game viewing can be good and the birdlife is excellent. The noisy black Korhaan who rises with a squeak when flushed out by a vehicle, is a hallmark of Nxai Pan and small raptors such as kestrel and goshawks abound.
Black-backed Jackal with pups. Pic: Norman Goldberg

SEASONS
Rainy Season: November to April is the hot wet summer season and the time when Nxai Pan is at its best. Game is abundant from December to April but if the rains have been heavy the roads may be difficult to negotiate.
Dry Season: May to September are more accessible times to be in Nxai Pan.

FACTS
Nxai Pan National Park covers an area of 810 sq. miles (2,100 sq. km)
Other than at Baine’s Baobabs, the park is not frequented by many tourists
This is a malarial area.

END_OF_DOCUMENT_TOKEN_TO_BE_REPLACED 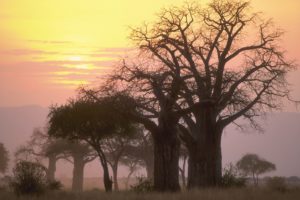