Lake Malawi is one of the Great Rift Valley lakes and lies in a depression which plunges well below sea level - to a depth of at 2,300ft ( ) in the north. It is the third largest lake in Africa and has impressive proportions with approximate dimensions of 365 miles (584km) north to south and 52 miles (83km) wide.

Half the south-eastern section of the lake belongs to Mozambique with the border running through the centre of the water, while Tanzania lies along the north-eastern shore.

Malawi is a long thin landlocked country, so the lake is extremely important as it takes up about one fifth of the country and many people make their living from it.

There are four busy ports and hundreds of fishing villages. However, there are still many stretches that are completely deserted with plenty of sandy beaches.

Lake Malawi bears many qualities of a sea except salty water and for much of the year it is placid and welcoming, while at other times strong winds and storms can produce surfable waves. A section of the lake at Cape Maclear in the south, has been declared the world’s first freshwater National Park and includes the peninsula of land and several islands.

This is more than all the freshwater species of Europe and USA put together.
There are also larger edible fish such as mpasa (lake salmon), vundu (catfish) and tilapia (breem), but fishermen have been complaining that their catches are getting smaller. The national park is a sanctuary for the biologically unique, often brightly coloured little fish called cichlids, much prized by freshwater aquarium enthusiasts. These fish have adapted very quickly in evolutionary terms, resulting in a prolific number of species. More than 500 have been recorded but it is thought there could be 1,000 different species in the lake.

ANIMALS & BIRDS – AQUATIC LIFE
Lake Malawi’s sub-aqua life is astounding and it can be like snorkelling in an aquarium. Many of the chichlids shine like polished silver as the sun refracts in the water, but there are many others like Cobalt Zebras and Mumbo Yellow (only found around Mumbo island within the national park), whose names reveal their dazzling colours.

Bird watching is an absolute pleasure and can be bewildering, as there is sometimes too much to look at! Within the national park it is not uncommon to find a pair of territorial fish eagles every 100 yards (100 metres). There are also countless kingfishers, herons and cormorants, all patrolling for food at different heights.

Reptile life is excellent with large monitor lizards, shiny skinks warming themselves on rocks and opaque geckos that come to life at night. Animals that might be seen on land are baboons, antelopes and hyrax.

SEASONS
Rainy Seasons: It usually rains from November to March and the storms are unpredictable. The air is clean at this time and there is no haze over the lake.
The rain diminishes in April and May followed by gentle winds and calm water.
Dry Season: July is cool and a little unsettled with more wind usually from the south east. The wind drops in August & September and the water becomes calmer. October is one of the best months as the lake is calm and very clear and the air is hot.

FACTS
This is a malarial area

END_OF_DOCUMENT_TOKEN_TO_BE_REPLACED 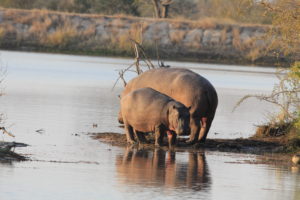