The Caprivi is an odd strip of land whose borders extend unnaturally towards the east, at the top right hand corner of Namibia. Hemmed in by Anglola, Zambia, Zimbabwe and Botswana, it was a strategic South African military zone for a long time and for the tourist is a gateway to Victoria Falls.

Today it is back in the hands of an independent Namibia and contains several National Parks and considerable safari opportunities. It is the only area of Namibia that is lush and green and well watered by rivers.

CAPRIVI GAME PARK
Wedged between Angola and Botswana the Caprivi Game Park extends along the Okavango River for about 112 miles (180km) until it meets the Kwando River in the east. Although it was proclaimed a park in 1968, it was controlled by the South African Defence Force and not managed as a conservation area. As a result there are few tourist facilities and the terrain is extremely sandy so a 4X4 vehicle is a pre-requisite.

The terrain is generally flat with deciduous woodlands, except for some 97-195 feet high (30-60m) dunes covered in vegetation.

ANIMALS & BIRDS
Although game is present, you may not see much as you are restricted to the single road running through the park.

MUDUMU NATIONAL PARK
The Kwando River runs through this National Park which offers a true African wilderness experience. In contrast to the rest of Namibia, the area is lush with marches, riverine forests, dense savannah and mopane woodland.

Unusually for a National Park there is a private lodge within its boundaries – Lianshulu Lodge – which offers guided walks, nature drives, boating and bird watching. South of Lianshulu the river breaks up into a labyrinth of channels to form the Linyati Swamp.

ANIMALS & BIRDS
An astonishing 430 species of birds have been recorded which is nearly 70% of Namibia’s total, and much game including the rare sitatunga and red lechwe as well as buffalo, elephant, zebra, antelopes, hippo and crocodiles.

MAMILI NATIONAL PARK
This has the distinction of being the largest wetland area of conservation status in Namibia. It is characterised by a complex network of channels, reed beds, ox-bow lakes and tree-covered islands. The focal points are the two large islands of Nkasa and Lupala in the Kwando/Linyati River. These islands can be reached by road but only in the dry season. After rains the area becomes flooded cutting them off from the mainland.

ANIMALS & BIRDS
Similar to nearby Mudumu National Park, this park is vibrant with bird and animal life.

SEASONS
Rainy season: Rain falls during the hot months of November to March and temperatures and humidity is high. Mosquitoes breed well in these conditions and a visit in the heart of the rainy season is best avoided.
Dry season: May to October is dry and animals tend to congregate along the river. Game is at its most dense and easily visible in the middle and end of the dry season. October becomes very hot with the anticipation of rain making the air heavy.

FACTS
This is a malarial area.

END_OF_DOCUMENT_TOKEN_TO_BE_REPLACED 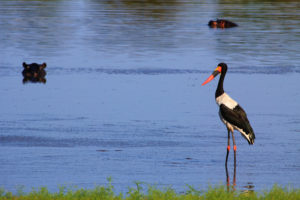 The Caprivi is an odd strip of land whose borders extend unnaturally towards the east, at…