Etosha is one of the largest and best game viewing parks in the whole of Africa. The reason is in the Ovambo name Etosha, which means 'huge white area' or 'place of dry water', depending upon whom you ask. For most of the year a vast shallow pan, which was once a lake the size of Holland, shimmers a glaring bright white from crystallised salt across its entire surface. Surrounding the pans is a variety of grass and woodlands amongst which live a wonderful variety of animals and birds, insects and reptiles.

The inhospitable pan is 75 miles (120km) long and 45 miles (72km) at its widest, and lone wildebeest or herds of oryx can be seen crossing it or just standing as if mesmerised.

If ever you are likely to see a mirage it will be here, as the intense hazy sun reflecting against the shimmering pans distorts your eyesight and makes you see all sorts of things that are not really there.

In complete contrast, when the rain arrives, up to three feet (1metre) of water turns the parched surface into an algae-rich soup attracting thousand of birds. The pink mist shifting slowly across the water is a huge flock of flamingoes, for whom this is an important breeding ground. After a good watering, the surrounding woodland savannah and scrubland, which is normally sparsely vegetated, bursts with an abundance of yellow blooms and rich grasses.

Etosha has dozens of waterholes, some are natural while others are artificially fed from boreholes. During the dry season, staking out a position at a waterhole viewpoint is a rewarding way to watch game without moving from one spot. A veritable ‘Noah’s Arc’ of species queue up to take a drink, with elephants hogging the lion’s share!

ANIMALS & BIRDS
Plains game such as zebra, wildebeest, giraffe, springbok, impala and eland abound in great numbers on the grasslands and congregate at waterholes in the dry season. Herds of fifty elephants are not unusual and often walk right down the middle of the road giving people in cars an incredibly close and thrilling encounter. Lions and hyenas must be searched for, but silver-backed jackals trot around almost oblivious to you. The desert dwelling oryx, upon which the mythical unicorn must surely be based, will certainly be seen here along with the impressive curly horned kudu. Etosha also contains endangered black rhino and unusual species like the black-faced impala – a larger and darker subspecies found only in south-western Angola and north-western Namibia.
Zebra Herd.

Etosha birdlife is absolutely wonderful with every kind of feathered friend. One to look for is the ground hornbill who looks like a downhearted widow with a red scarf around her face. Other less terrestrial hornbills are the cheeky yellow-billed hornbills whose squawk and loping flight becomes a familiar sight. Lilac breasted rollers are colourful enough at they sit on their favourite perch, but when they take off in pursuit of an insect, their underwings give a blinding flash of electric blue. Eagles and vultures cruise high in the warm air currents or perch on branches with beady eyes alert.

SEASONS
The best game-viewing time is during the coolest dry months of May to September, but bird watching is at its peak in the rainy season from November to March. The average daily temperature is 88°F (31°C) and average minimum is 57°F (13.7°C).
Rainy Season: Rainfall is approximately 14 inches (358mm) per year with January to March the hottest and wettest months. During this time the pans usually fill with water and animals give birth.
Dry Season: July to September are the driest months.
The ‘in between’ months, which are neither wet nor dry but somewhere in the middle, are very pleasant.

FACTS
As this is a National Park, no off-road or night driving is allowed.
Several days are needed to visit this unique park

END_OF_DOCUMENT_TOKEN_TO_BE_REPLACED 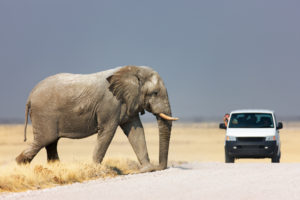 Etosha is one of the largest and best game viewing parks in the whole of Africa. The reason…