In the Nama language, Namib means vast, and this is an understatement. The Namib Naukluft Park is the largest conservation area in Namibia and one of the largest in the world, at almost 19,305 square miles (50,000 km²).

Parts of this park resemble a lunar landscape while other places rise with the purple-hued rocky mountains of the Naukluft Mountain massif. Just as tall and certainly as impressive are the stunning orange sand dunes of Sossusvlei, blown into razor sharp ridges and peaks by the wind. A few gravel roads traverse the northern section of the park and another leads into the middle dune area of Sossusvlei and Sesriem canyon. The park also incorporates the estuarine lagoon at Sandwich Harbour which is a wetland protected from the ferocious Atlantic Ocean and from any treadmill of visitors as permits are required.

Animals, insects and plants have adapted to live in this generally inhospitable region and get most of their water from sea mists that roll far inland. Although almost 200 miles (320km) from any main road, a visit to Namibia would not be complete without venturing into the Namib-Naukluft Park. If not on foot or vehicle then by light aircraft or hot air balloon, for the best view you will ever get of an endless rippling desert. The trip is worth it as the solitude is immeasurable, and your place in the great scheme of life takes on a new perspective and a curious insignificance.

SOSSUSVLEI
The largest sand dunes in the world are awesomely enormous and eerily enticing. The feminine curves of Sossusvlei’s rich ochre sea of sand, rise tantalisingly to almost 1,000 feet (305metres), which is 300 feet (91metres) more than their nearest rivals in Arabia. Discarding shoes and plunging bare feet into the hot soft sand is the best way to climb to the top, but each step forms a mini sand slide and footprints look more like an insect trail as they are dwarfed by the sheer size and immensity of the dunes.

Geologists suspect that this supreme desert, that covers most of the Namib Naukluft National Park, is the oldest desert known to man. The older the dune the brighter the colour from slow iron oxidisation and a zillion tiny fragments of garnets. These dunes refract spectacular colours with the changing light and turn from burnt orange through reds to deepest mauve.

About two-thirds of a mile (1km) away from Sossusvlei is the Dead Vlei – a salt encrusted dry lake named for its large dead camel thorn trees. These tell of a time when plentiful water allowed them to grow to full height, but as the climate changed and the water disappeared they died. Amidst this desperate scene comes new life in the form of a few young camel thorn trees struggling bravely to survive and on the western slopes, some bright green !Nara melons defying the shifting sand.

ANIMALS & BIRDS
Apart from infrequent rains, the flora and fauna of the interior relies on a regular mist that rolls up to 62miles (100km) inland. All creatures make use of this life-giving moisture and the head-standing beetle has come up with a unique adaptation. As the fog descends it tilts forward and droplets of moisture run down grooves in its body to its mouth.

The Anchieta’s dune lizard has an interesting way of coping with the scorching sand, and does a kind of thermoregulatory dance putting only two feet down at a time and hopping from one pair of legs to the other, using the tail as a stabiliser.

Snakes are common in the Namib, but few of the 20 species are ever seen. At sunset you may hear the staccato clicking call of some elusive bird, but this is in fact the nightly call of a male barking gecko.

There are mammals here too and the impressive black and taupe, spiralled-horned oryx is master of the vast shadeless wilderness. With the conformation of a stocky pony, he is the thoroughbred of the desert with unique adaptations enabling him to live in this harsh environment. The oryx can survive with a body temperature as high as 113°F (45°C) (which is usually lethal), because the animal cools blood to the brain by passing it through the nostrils first. Springbok are also able to survive for long periods without water, as long as they can find food with a moisture content of no less than 10%. Spotted hyenas inhabit the Namib Naukluft Park but are rarely seen, while black-backed jackals are more visible. Jackals eat almost anything including rats and mice, birds, insects, reptiles, fruits and berries and therefore survive well in almost any terrain.

The Sandwich Lagoon is an important wetland of pristine beauty, which attracts in the region of 200,000 birds to the lagoon and mudflats. Flamingoes constitute the largest percentage of water birds here, who usually fly inland to breed during the rainy season. The lagoon also supports several endangered Red Data species such as chestnutbanded plover, white pelican and blacknecked grebe.

SEASONS
On the rare occasions when it rains, the desert responds amazingly quickly, producing a miracle of yellow flowers, green leaves and sprouting grasses. Ephemeral (short lived) plants appear as if by magic and replenish the seed bank for next year.
Rainy Season: rain usually falls in late summer from February to April, but an 8 year study showed that most showers in the southern Namibia (Sossusvlei area), occurred in the months of December, March and April with an average rainfall of 63mm per annum. However, rainfall is erratic and unpredictable and the high summer temperatures cause fast evaporation. As a result the Namib is classified by international standards as ‘hyper-arid’.
Temperatures: From November through to March the daytime temperatures rarely peak below 95°F (35°C) or drop lower than 59°F (15°C) at night. From April to October daytime temperatures range between a very pleasant 77°F (25°C) to 95°F (35°C), with June, July and August recording the lowest night-time temperatures around 41°F (5°C). Temperatures are recorded in the shade and the air feels considerably hotter under the scorching sun with heat radiating off the dunes.

END_OF_DOCUMENT_TOKEN_TO_BE_REPLACED 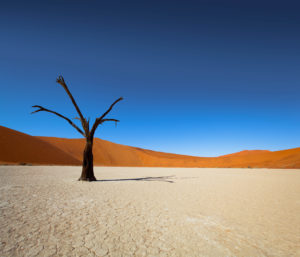 In the Nama language, Namib means vast, and this is an understatement. The Namib Naukluft…