The fresh mountain scenery and magnificent panoramic views over the Klein Drakensberg escarpment are quite spectacular and give the area its name of 'Panorama Route'. The nature reserve runs along the Blyde River Canyon's winding path, which at every turn offers more and more impressive views over sheer edges dropping up to 2,600 feet (800metres) into the riverbed.

Viewpoints are named for the spectacles they offer, and God’s Window and Wonder View hint at the magnitude of the scenery.

The ‘Pinnacle’ is a single quartzite column rising out of the deep wooded canyon and the ‘Three Rondavels’ (also called the ‘Three Sisters’), are three huge spirals of dolomite rock rising out of the far wall of the canyon like rockets about to take off. Their domed heads are iced in green and their sides are stained with fiery orange lichen. From the ‘Three Rondavels’ you can see the extensive Swadini Dam in the far distance, which marks the end of the reserve.

At the meeting point of the Blyde River (‘river of joy’) and the Treur River (‘river of sorrow’), water erosion has created one of the most remarkable geological phenomena in South Africa. The ‘Bourke’s Luck Potholes’ have taken thousands of years to form weird cylindrical sculptures carved by swirling water. The smooth red and yellow rocks contrast artfully with the dark pools, in which swim many fish.

The geology and climate of this high rainfall plateau, means there are masses of beautiful waterfalls – many of which you can visit, while others are hidden deep within some of the largest man-made forestry plantations in the world, with row upon row of pine and eucalyptus trees. There are also many streams and fresh trout is on the menu of most restaurants.

Its proximity to Kruger National Park makes this a convenient post-safari scenic stopover.

ANIMALS & BIRDS
The rich and varied plant life is influenced by extreme climate, a range of altitudes and various soil conditions. Plants range from montane sour grassland on the high summits and plateaux to sub-tropical rainforest in the upper reaches of the ravines and riparian forests on the banks of perennial rivers.

This variety of plant life supports an equally rich and varied fauna. Klipspringers and rock hyrax (known as dassies), find food and shelter in rocky areas, the grassland supports grey rhebuck and rare oribi as well as rodents, reptiles, seed-eating birds and plenty of insects. Kudu prefer the cover of wooded bushveld and bushbuck and bushpig move amongst the luxuriant growth on the riverbanks.

All five of South Africa’s primates are found in the reserve; the rare samango monkey, nocturnal greater and lesser bushbabies, chacma baboons and vervet monkeys.

Hippos and crocodiles live in and around the rivers and wetlands of Swadini Dam, as do waterbirds, otters and numerous fish. Almost every type of habitat that attracts birds is here and all three South African species of lourie are present – two are extremely colourful.

SEASONS
Rainy Season: The plateau is somewhat cooler than the nearby low-lying Kruger area but still has hot rainy summers starting in October and ending around March. A summer haze is common.
Dry Season: The winter months from April to September are extremely pleasant with warm dry days and cool nights.

END_OF_DOCUMENT_TOKEN_TO_BE_REPLACED 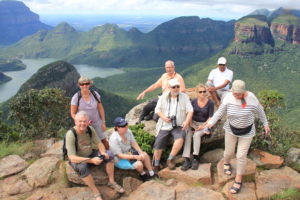