The Cederberg is a massive rock wilderness whose giant sandstone boulders have been sculpted by wind and rain into bizarre and artistic shapes. In places the earth is a rusty red and the rocks are every shade of orange, cream, yellow and brown. The towering bastions of rocks piled precariously one upon the other are the perfect setting for a wild west movie and you almost expect Red Indians to be silhouetted along the ridge.

The Cederberg is hot and dry but comes to life with winter rains that encourages an abundance of spring flowers.

Although this extraordinary mountain range is only a three-hour drive north of Cape Town, it feels very far from civilisation. Many people find solace in this wilderness and spiritual retreats are often facilitated in these mountains. Its infinite space and solitude seems to inspire inner peace and tranquillity.

The area is abundant in the oldest type of human art form- rock paintings and engravings – many of which have never been discovered. It is quite possible when hiking in the area, to find Bushmen paintings in caves and on overhangs, which have remained unseen for thousands of years. The paintings show handprints, hunting and sleeping figures, and animals such as elephants that used to roam the area. It is presumed that Shamans, in a trance-like state, were the artists.

The Cederberg has areas of grasslands and rocky bushland and many rivers coursing through – some only flow after winter rains, while others are perennial. On the Bushmans Kloof estate in the northern Cederberg, are several dams which bring relief to grazing animals during the intense summer heat.

In a deep valley within the Cederberg mountains is a village that time has almost forgotten. Wuppertal is a picture postcard whitewashed village of thatched cottages, which was a Rhenish Mission Station. It is amazing to think that as far back as 1830, missionaries found this isolated spot and taught their flock millinery skills, shoemaking, joinery and thatching. This little place is now renowned for its hand-made ‘velskoene’ soft leather shoes, and tannin-free herbal Rooibos (red bush) tea, which comes from a reed grown around here.

ANIMALS & BIRDS
Leopards and caracals (the African version of a lynx), live here and generally prey on small mammals like dassies (rock hyrax – rather like very large guinea pigs). But leopards are quite capable of hunting small antelopes such as springbok, klipspringer and reedbuck. Some larger antelopes including bontebok, eland and oryx are found in parts of the Cederberg, as are rare mountain zebra who graze on the bushy hillsides and areas of open grasslands. Meerkats and mongooses live in sociable groups and eat scorpions, beetles and other small creatures.

SEASONS
Summer: November to March is summer in the Cederberg which is hot and dry with intense mid-summer heat over 86°F (30°C), which is increased by heat radiation from the rocks.
Winter: Rain usually falls between May and September but the coldest winter months are June, July and August with temperatures dropping to freezing point with snow not uncommon on higher ground. Days are often clear and bright but the wind can be icy.
Spring: Spring flowers emerge in force usually in August and often last until early September – but it all depends on the rain and the sun!

END_OF_DOCUMENT_TOKEN_TO_BE_REPLACED 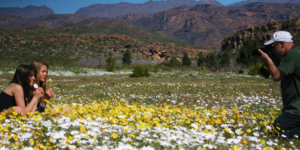