This is a large and incredibly scenic park with rippling hills covered in low acacia bush, and lofty viewpoints giving a bird's eye view of who's doing what where. The north of the park is more rugged and mountainous with forests and grasslands, while the south and west is more undulating with open savannah. Hluhluwe is a difficult word to pronounce but something sounding like "Shoushlooee" is close enough.

The park contains an immense diversity of fauna and flora and is particularly famous for its conservation of black and white rhino. It contains hundreds of endangered black rhino and the largest population of white rhino in the world.

Apart from game-viewing drives, there are two self-guided auto trails, for those wishing to self drive themselves around the park. There are a number of picnic sites and several self-guided walks providing magnificent views. Two daily walks in the company of a field ranger can be booked through the camp office and extended several day hikes are undertaken in the southern Umfolozi part of the park.

ANIMALS & BIRDS
Hluhluwe Umfolozi is home to 1,600 white rhino and 370 black rhino – an impressive number which means you are very likely to see one or both species. It also contains the rest of the Big Five; buffalo, elephant, lion and leopard, as well as many other species including blue wildebeest, zebra, giraffe waterbuck, nyala, kudu, bushbuck, warthog, cheetah, hyena and jackal plus about 24,000 impala. You may have some close encounters with elephants as they often cross or block the road right in front of your vehicle.

In excess of 300 species of birds have been recorded.

SEASONS
Rainy Season: This is a hot and humid sub-tropical area and most rain falls during the months of September to April. Annual rainfall is 29-39 inches (750-1,000mm).
Dry Season: The dry season lasts over winter from May to August and the temperatures are very pleasant with warm days and cool nights.

END_OF_DOCUMENT_TOKEN_TO_BE_REPLACED 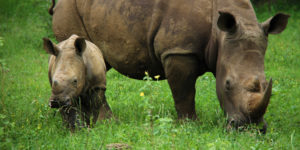 This is a large and incredibly scenic park with rippling hills covered in low acacia bush,…