This reserve created in 1991, sits right on the South Africa-Botswana border in a malaria-free area. In the largest movement of animals since Noah filled his arc, the 30,352 acre (75,000 ha) reserve was stocked with 10,000 head of game from 27 different species. The park's very existence contributes to the preservation of local fauna and flora and rare animals such as rhino and wild dog, and also provides a more sustainable environment for the local people.

ANIMALS & BIRDS
Not only does this reserve boast the ‘Big Five’ but it also has the ‘Super 7’! This adds cheetah and wild dog to the traditional five; leopard, lion, buffalo, elephant and rhino. Plus brown hyena, sable, eland, gemsbok, giraffe and large herds of plains game and plenty of birds.

Wild dogs are a speciality of the area and due to their rarity and fascinating behaviour, are a wonderful sight. They are also known as Cape hunting dogs or painted dogs because of their tricoloured (black, white and tan) abstract coat. Wild Dogs are Africa’s most formidable hunters (followed by hyena and lion), and the essence of their successful social system is co-operative hunting and food sharing. Not only do they regurgitate food for the young but the babysitter gets fed too. They travel great distances while hunting and as a result often traverse farmland where they were almost shot to extinction. Luckily they are thriving in Madikwe.

SEASONS
Rainy Season: it rains from October to April with the highest rainfall expected between November and February. Daytime temperatures are hot and humid with an average of 88°F (31°C).
Dry Season: the winter months of May to September are dry and cold with evening temperatures as low as 35.5°F (2°C) and only 72°F (22°C) in the daytime.

FACTS
Madikwe is 3½-4 hour’s drive from Johannesburg or 45 minutes by aircraft.
This is not a malarial area.

END_OF_DOCUMENT_TOKEN_TO_BE_REPLACED 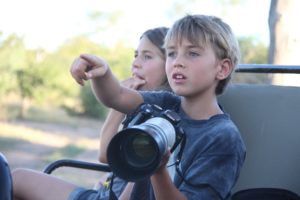 This reserve created in 1991, sits right on the South Africa-Botswana border in a…