KwaZulu Natal is extremely proactive in preserving its exceptional natural heritage and the Maputaland Coastal Forest Reserve of the north-east corner of South Africa, is a World Heritage Site.

The reserve stretches all the way from the Mozambique border in the north to Sodwana Bay in the south. This sub-tropical paradise encompasses pristine forests and wetlands with strings of lakes and marshes, and marine ecologies including deserted beaches and coral reefs.

Incorporated in the Maputaland Coastal Forest Reserve are a number of small protected areas:

Lake Sibaya Nature Reserve contains the largest freshwater crystal clear lake in South Africa and is separated from the coast by impressive sand dunes rising to 536 feet (165metres). The lake contains some crocs and hippos, and there are boats (with skipper) for hire for fishing trips. The pristine coastline of this reserve stretches for 62 miles (100km).

Kosi Bay Nature Reserve is a coastal reserve with a string of four lakes and a wide variety of terrain and unique eco systems in the fig tree and palm forests, mangrove swamps, freshwater lakes, sand dunes, pristine beaches and coral reefs. It is home to the Tonga people who use ingenious fish traps made from reeds, to make their daily catch in the tidal lagoon.

The lakes contain crocs and hippos, while antelopes inhabit the dry inland parts of the reserve. The mouth of the lake system is considered to provide some of the best snorkelling in South Africa. But the areas is most famous for its leatherback turtles, that lay their eggs in the soft beach sand from the end of October through to January. Turtle viewing is allowed with wildlife rangers.

Rocktail Bay is a (40km) stretch of unspoilt, undeveloped, pristine coastline where a sophisticated conservation model has been successfully implemented, between conservation authorities, local communities and Wilderness Safaris tour operator. A small number of visitors stay at Rocktail Bay Lodge and can experience nature walks into the coastal forest, watching turtles laying their eggs, boat trips out to sea, scuba diving and snorkelling. This eco-friendly tourism project is successfully helping to preserve the area and create jobs.

The warm sea of this coastline attracts a great diversity of marine life including loggerhead and leatherback turtles, ragged-tooth sharks and enormous whale sharks, bottlenose dolphins and humpback whales, plus a myriad of colourful reef fish and other sea creatures.

SEASONS
Rainy Season: the climate is hot and humid in the rainy summer months of October to March.
Dry Season: The dry season lasts over winter from April to September and the temperatures are very pleasant with warm days and cool nights.

FACTS
This is a malarial area

END_OF_DOCUMENT_TOKEN_TO_BE_REPLACED 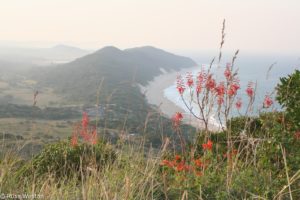