Mkhuze (also spelt Mkuze), is a place of great beauty and makes up the northwestern spur of the Greater St Lucia Wetland Park - a recently declared World Heritage Site.

It is a land of great contrasts with an interesting range of habitats. There are low lying hollows adjacent to ancient red sand dunes ridges and broad stretches of gently rolling acacia savannah. The slopes of the Lebombo mountains to the west, contrast with low-lying swamps, riverine forests including attractive stretches of fig trees, and a variety of woodlands. In the heart of the reserve is a rare sand forest, noted for its spreading, dark-leafed sherbert trees and red heart trees, which release pink-winged seeds in the autumn.

Two shallow water pans, Inhlonhlela and Insumo lie in the north and east, and are lined with water lilies in summer attract hippos, crocodiles and considerable bird life.

The reserve is open to the public for self drive safaris, and the trail through one of Africa’s last remaining unspoiled fig tree forests is very popular. There are three observation platforms in the reserve overlooking pans and waterholes where animals come to drink
A sacred burial site of chiefs of the Kwajobe clan is located in this reserve and only clan members may go there and commune with their ancestors. For a glimpse into the traditional northern Zulu lifestyle and the crafts of the KwaJobe community, a cultural village has been opened nearby.

ANIMALS & BIRDS
Animals to be found in the reserve include giraffe, elephant, black and white rhinoceros, leopard, nyala, warthog, blue wildebeest, impala, kudu, eland and smaller antelope. Other rarely seen species occurring here are cheetah, hyena and little suni dwarf-antelope..
More than 420 bird species are on record, including many migrants and waterbirds including two species of pelicans.
Crocodile

SEASONS
Rainy Season: The temperate climate is very pleasant but a hot and humid summer commences in October with thunderstorms, which come to an end around March. The summer rains bring the park to life although the thick foliage makes animals harder to view.
Dry Season: The dry winter months from April to September are very pleasant with warm days and cool nights. The best game viewing is normally considered to be in winter as the vegetation becomes sparse and water is restricted to rivers and waterholes.

Mkhuze is a 99,000 acres (40,000 hectare) reserve in northern Zululand
It was proclaimed as a protected area in 1912.
This is a malarial area.
This is a public reserve containing several lodges.
Off road driving is not permitted.

END_OF_DOCUMENT_TOKEN_TO_BE_REPLACED 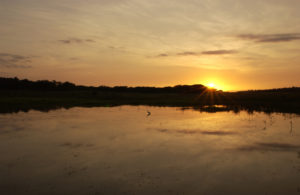 Mkhuze (also spelt Mkuze), is a place of great beauty and makes up the northwestern spur of…