The Cape Peninsula is the thin finger of land in the south-western most corner of Africa, with the city of Cape Town at its head. As you travel south towards Cape Point, the land gets narrower until it disappears into the ocean, with nothing beyond except Antarctica.

The Table Mountain National Park is one of South Africa’s newest creations, only proclaimed in its final entirety in 1998. It is a happy ending to the efforts made to conserve the rich natural and cultural history of this most famous of all cape’s. Several reserves have been incorporated under the SA National Parks umbrella and now the Cape of Good Hope Nature Reserve, Table Mountain Nature Reserve and Silvermine Nature Reserve, plus the Boulders beach penguin colony, are cohesively administered.

Recognised globally for its extraordinarily rich, diverse and unique flora, this singular peninsula – with the rugged Table Mountain range meandering down the centre and soft white sandy beaches, rocky coves and sand flats – is a truly remarkable recreational asset. Nowhere else in the world does an area of such spectacular beauty and such rich bio-diversity exist almost entirely within a metropolitan area – the thriving and cosmopolitan city of Cape Town. Numerous scenic drives are so impressive they require an unhurried approach, to appreciate their stunning beauty.
The cold Atlantic Ocean (46°- 59°F (8°-15°C), runs down the western edge of the peninsula, while the warmer waters of False Bay (55°- 68°F (13°-20°c), caress the eastern shores. These bodies of water are both visible in some places along the route, and it is often said that the Atlantic finally meets the Indian Ocean at Cape Point. This is not strictly true as satellite images show that the warm and cold currents mingle off Africa’s southernmost point at Cape Agalhus, 106 miles (170km) south east of Cape Town. However, there are days when a distinctive line is visible in the ocean at Cape Point, but the sea know no boundaries and call them what you will, these waters will become the great Southern Ocean.

The infamous Cape Point and Cape of Good Hope – two separate places in very close proximity – were rounded by the fearless Portuguese navigator, Bartholomew Dias in 1488. Dias returned in 1500 to double the cape again, but this time a violent storm sank his ship in the deep waters of the Cape. Cape Point, also known as ‘Cape of Storms,’ has claimed over 20 shipwrecks and it is said that the phantom ship ‘The Flying Dutchman’, still appears in the mist on occasions. In 1578 Sir Francis Drake described it as “The fairest cape in the whole circumference of the globe.”

FLORA
The Cape’s flora is quite unique, containing the world’s Sixth Floral Kingdom, named Fynbos. This encompasses Proteas, Ericas, Reeds and Bulbous plants, which flourish in the nutrient poor soils. Under such conditions, an astonishing diversity of 2,256 species has emerged – more than the whole of Great Britain (which supports 1,500 species), in an area 5,000 times smaller! The Cape contains 526 of the world’s 760 erica species and 96 out of the world’s 160 types of gladiolus, and Table Mountain alone supports 1,470 species.
African Penguins

ANIMALS & BIRDS
In the pristine Cape of Good Hope Nature Reserve, keep your eyes open for beautiful brown and white bontebok antelopes, dawdling tortoises and dashing ostriches and be on the lookout for cheeky baboons in the parking lot.
In the oceans around the Cape, Southern Right whales entertain thousands of spectators each year when they come so close to shore that you can smell their fishy breath. These wonderful gentle giants of the sea come to the Cape peninsula from August to October to mate and calve. Sightings peak in September, and there are a number of well-placed viewpoints along the coastline.
Boulders Beach is home to a growing colony of the vulnerable African penguins, which can easily be viewed at close quarters from a wheelchair-friendly boardwalk. They were commonly called ‘Jackass’ penguins, and when you hear a noise like a donkey being strangled, you will understand why.

The birdlife along the peninsula is prolific with iridescent sunbirds, long-tailed Cape sugarbirds, rare black oystercatchers, gulls and arctic terns, plus raptors like eagles, kestrels, kites and buzzards.

SEASONS
Cape Town enjoys a Mediterranean climate with hot dry summers and mild wet winters and a distinctive spring and autumn. However, with nothing but water all around, the weather can be a little unpredictable and the wind can whip itself into a fury.
Rainy Season: the north-westerly wind brings rain to the peninsula usually between May and September. The coldest winter months are June, July and August with temperatures ranging from 45°-70°F (7°-20°C). Days are often clear and bright but the wind can be very chilly and snow sometimes falls on nearby mountains.
Dry Season: By October the rain has usually stopped and summer kicks in fast with the days getting hotter until the temperatures reach a peak in December, January and February at around 60°-80°F (15°-27°C). The summer southeaster can make days on False Bay’s beaches very unpleasant, so when this ‘Cape Doctor’ is blowing, choose the more sheltered Atlantic beaches nearer Cape Town.
Spring: the spring flowers of the Western Cape are a wonderful spectacle and emerge in force in about August or September when heat and moisture encourage them to bloom.

FACTS
This is a non-malarial area.
The separate parks that comprise the whole are open to the public on payment of an entrance fee.
There is no accommodation within the parks.
The Cape of Good Hope Reserve covers 10,928 acres (7,750 hectare).

END_OF_DOCUMENT_TOKEN_TO_BE_REPLACED 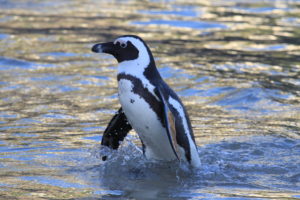 The Cape Peninsula is the thin finger of land in the south-western most corner of Africa,…