Tsitsikamma (pronounced sit-si-kama) is a wild and beautiful place where primeval yellowwood and stinkwood forests set the scene for one of South Africa's most pristine parks. Situated mid-way along the Garden Route, the park's main focus is its rocky coastline with cliffs that press close to the sea. The park even extends (5km) offshore to include inter-tidal, reef and deep sea eco-systems.

Rivers coursing from the distant Outeniqua Mountains cut a number of exceptional gorges through the cliffs to the sea. The Storms River mouth offers magnificent views up and down the gorge and is where a number of short walking trails begin, one of which includes a wobbly suspension bridge.

Tsitsikamma is particularly well-known for its ‘Otter Trail’ – a strenuous five-day hike where you must carry your own food and bedding up and down ravines and along cliff edges. Such a challenge attracts hikers from all over the world, and as only a certain number of people are allowed on the trail each day, it is booked up a year ahead.

ANIMALS & BIRDS
The rare Cape clawless otter, after which the Otter Trail is named, is one of the most charming and most elusive animals in the area. Other more extrovert species include vervet monkeys and baboons, while small antelopes tend to hide in the forests.

Birding is good with both forest and coastal species, and marine life is varied with rewarding snorkelling and scuba diving. Dolphins regularly play in the surfbreak.

SEASONS
The temperate climate of this area brings pleasant temperatures and irregular rainfall.
Rainy Season: The wettest months in Tsitsikamma are May and October, with a high annual rainfall of 47 inches (1,200mm) per annum. Winter sets in from about June to August but it is not unpleasant with mild days but cold nights.
Dry Season: November to March are the hot driest months, with mid-summer temperatures peaking in December, January and February.

END_OF_DOCUMENT_TOKEN_TO_BE_REPLACED 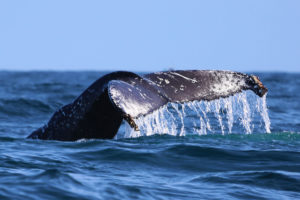