A couple of new up-market lodges and some visits by Nelson Mandela, together with a touch of good marketing has brought the Welgevonden Game Reserve to people's notice. It has suddenly become a popular weekend safari destination out of Johannesburg because of three main reasons; it is only 3 hours drive north of the International airport; it has the famous 'big Five" animals; it is Malaria free. These important factors make it an attractive safari proposition.

The highly attractive terrain is in the rusty-red foothills of the Waterberg (Water mountain), whose pleats and folds are thickly layered with bush willow.

Narrow valleys of golden rocks course with streams and a variety of fauna including succulents like Euphorbia candelabra, whose name gives away its shape.

Due to heavy summer rainfall, the soil is leached of nutrients and therefore the vegetation is predominantly sour bush, as opposed to the sweet bush of the lower-lying hotter Kruger area. However, the animals don’t seem concerned and game watching is good.

ANIMALS & BIRDS
All the big game is here including rhino, elephants, buffalo, zebras, antelopes, as well as leopard, lion, hyena, although not in the same density as around the Kruger region. Bird watching is good particularly during the rainy season.

SEASONS
The Waterberg is more elevated than most other game reserves in South Africa and has a somewhat cooler climate.
Rainy Season: Welgevonden is an area of summer rainfall with spectacular thunder and lightening showers predominantly in February and March. At this time it is hot and humid and the bush is thick so game viewing is more difficult.
Dry Season: April to September is the cool dry winter season with bright clear warm days and cold particularly in the mid-winter months of June to August.

END_OF_DOCUMENT_TOKEN_TO_BE_REPLACED 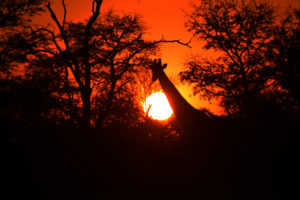 A couple of new up-market lodges and some visits by Nelson Mandela, together with a touch…