This park hugs a beautiful section of South Africa's west coast and incorporates coastline, islets and lagoon wetlands, playing an important role for resident and migratory birds. Much of this Atlantic seaboard is rugged and hostile, but this portion is as gentle as the Atlantic gets. The rocky Postberg peninsula creates sheltered bays and coves and closes around a warm shallow and very inviting lagoon.

Swimming and watersports are allowed in certain sections of the Langebaan lagoon and the holiday town that has developed on the shores is a laid back kind of place where people go to the supermarket in sarongs and bare feet.

Our ancestors realised that this was a special place and we know that 120,000 years ago, a woman (nicknamed Eve), walked down a wet dune near the lagoon, possibly in search of food. In 1995 Eve’s footprints were discovered, set like concrete into the sand and disappearing into the rock strata, and to much acclaim around the world she was she pronounced to be the closest relative to modern man/woman ever found.

Perhaps she also marvelled at the magnificent spectacle that occurs every spring – the emergence of thousands of little flowers forming a gloriously colourful carpet across the Postberg Peninsular. Visitors come from all over the world to see the flowers displays all along the west coast.

ANIMALS & BIRDS
Several species of buck reside in the park and during a leisurely drive you should see bontebok, eland and wildebeest. This is real tortoise country too and they have right of way when crossing the road.

The West Coast National Park is a highly important area for preservation of birds who live here either permanently or seasonally in their thousands. This includes 50% of the world’s population of swift terns, 25% of the Cape Gannets, 15% of the crowned cormorants and 12% of endangered African black oystercatchers and a considerable number of African (Jackass) penguins. A quarter of all South African bird species can be seen here.

During the spring and summer months from September to April the influx of migrant waders is phenomenal. Approximately 55,000 curlew sandpipers arrive at Langebaan lagoon after a 9,375 mile (15,000km) flight from the Siberian Arctic. Their miraculous journey takes them from the very far north to the deepest south in just six-weeks.

The west coast Atlantic Ocean harbours giants of the sea including several species of whales and dolphins, cape fur seals and great white sharks. The lagoon however is not their preferred territory and is the domain of the well-camouflaged harmless sand shark, who sits on the bottom in the shallows. He won’t even move until you step on him and it is not certain who gets the bigger shock – you or the shark! The sandy shores of the lagoon are just bursting with life and digging into the wet sand reveals hundreds of little prawns.

SEASONS
The temperate coastal climate of the Cape west coast has warm to hot dry summers and cool to cold wet winters with a lot of wind year round.
Summer: It starts getting hot in about November and peaks in December, January and February with temperatures from 77-86°F (25-30°C). Early morning summer mists are either blown away by the south easter or burnt off by the sun.
Winter: Rain usually falls between May and August but the coldest winter months are June, July and August when the nights are cold.
Spring: Spring flowers emerge from July to September depending upon the combination of rain and sun.

END_OF_DOCUMENT_TOKEN_TO_BE_REPLACED 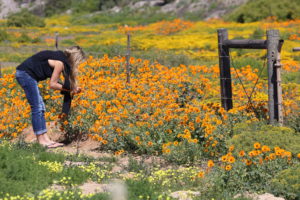