The Wild Coast, as its name suggests is rugged and treacherous, with numerous shipwrecks along its deserted beaches. It is the heart of unspoilt rural South Africa, almost untouched by time and particularly untouched by the infrastructure that the rest of South Africa is accustomed to.

This is because it was a black homeland within apartheid South Africa that was not deemed worthy of development. Today it remains a poor area dotted with villages of traditional mud and thatch huts. Cattle are grazed on the grasslands and the land is toiled by hand and oxen to provide a subsistence living.

The essence of the Wild Coast is that nothing happens in a hurry, which is definitely the case in the small coastal towns of Port St Johns and Coffee Bay. Several lodges have sprung up along this coast to afford visitors a glimpse of the lovely scenery along the rocky coastline interspersed with long empty beaches. There are still patches of thick forest and some remote coastal reserves with unique flora.

A notable resident of this region is the illustrious Nelson Mandela, who comes from the inland village of Qunu near Umtata.

NATURAL HISTORY
Wildlife is sparse along this stretch even though great tracts of the coast are deserted. The reserves have been created mainly to preserve the indigenous flora, such as the endemic Pondo coconut palm in Mkambati Nature Reserve.

If you venture along the coast you are certain to see fish eagles as they perch on the skeletons of wrecked ships. In the vegetated and wooded areas the birdlife is prolific.

SEASONS
Rainy Season: This is not quite in the sub-tropical climatic region and rainfall is more erratic than elsewhere. The wettest time is over the summer months of January and February.
Dry Season: The dry season lasts from April to October which are the winter months with mild days and chilly evenings.

END_OF_DOCUMENT_TOKEN_TO_BE_REPLACED 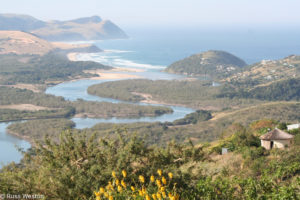 The Wild Coast, as its name suggests is rugged and treacherous, with numerous shipwrecks…